Vimentin on the move: new developments in cell migration 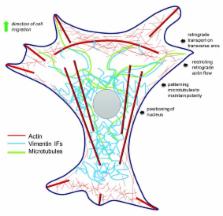 The vimentin gene ( VIM) encodes one of the 71 human intermediate filament (IF) proteins, which are the building blocks of highly ordered, dynamic, and cell type-specific fiber networks. Vimentin is a multi-functional 466 amino acid protein with a high degree of evolutionary conservation among vertebrates. Vim −/− mice, though viable, exhibit systemic defects related to development and wound repair, which may have implications for understanding human disease pathogenesis. Vimentin IFs are required for the plasticity of mesenchymal cells under normal physiological conditions and for the migration of cancer cells that have undergone epithelial–mesenchymal transition. Although it was observed years ago that vimentin promotes cell migration, the molecular mechanisms were not completely understood. Recent advances in microscopic techniques, combined with computational image analysis, have helped illuminate vimentin dynamics and function in migrating cells on a precise scale. This review includes a brief historical account of early studies that unveiled vimentin as a unique component of the cell cytoskeleton followed by an overview of the physiological vimentin functions documented in studies on Vim −/− mice. The primary focus of the discussion is on novel mechanisms related to how vimentin coordinates cell migration. The current hypothesis is that vimentin promotes cell migration by integrating mechanical input from the environment and modulating the dynamics of microtubules and the actomyosin network. These new findings undoubtedly will open up multiple avenues to study the broader function of vimentin and other IF proteins in cell biology and will lead to critical insights into the relevance of different vimentin levels for the invasive behaviors of metastatic cancer cells.

Andrew Chatr-aryamontri,  Rose Oughtred,  Lorrie Boucher … (2016)
The Biological General Repository for Interaction Datasets (BioGRID: https://thebiogrid.org) is an open access database dedicated to the annotation and archival of protein, genetic and chemical interactions for all major model organism species and humans. As of September 2016 (build 3.4.140), the BioGRID contains 1 072 173 genetic and protein interactions, and 38 559 post-translational modifications, as manually annotated from 48 114 publications. This dataset represents interaction records for 66 model organisms and represents a 30% increase compared to the previous 2015 BioGRID update. BioGRID curates the biomedical literature for major model organism species, including humans, with a recent emphasis on central biological processes and specific human diseases. To facilitate network-based approaches to drug discovery, BioGRID now incorporates 27 501 chemical–protein interactions for human drug targets, as drawn from the DrugBank database. A new dynamic interaction network viewer allows the easy navigation and filtering of all genetic and protein interaction data, as well as for bioactive compounds and their established targets. BioGRID data are directly downloadable without restriction in a variety of standardized formats and are freely distributed through partner model organism databases and meta-databases.

Mechanical integration of actin and adhesion dynamics in cell migration.

Jane M Waterman,  Christian Schneider,  Margaret L. Gardel … (2009)
Directed cell migration is a physical process that requires dramatic changes in cell shape and adhesion to the extracellular matrix. For efficient movement, these processes must be spatiotemporally coordinated. To a large degree, the morphological changes and physical forces that occur during migration are generated by a dynamic filamentous actin (F-actin) cytoskeleton. Adhesion is regulated by dynamic assemblies of structural and signaling proteins that couple the F-actin cytoskeleton to the extracellular matrix. Here, we review current knowledge of the dynamic organization of the F-actin cytoskeleton in cell migration and the regulation of focal adhesion assembly and disassembly with an emphasis on how mechanical and biochemical signaling between these two systems regulate the coordination of physical processes in cell migration.

Elly Hol,  Milos Pekny (2015)
Glial fibrillary acidic protein (GFAP) is the hallmark intermediate filament (IF; also known as nanofilament) protein in astrocytes, a main type of glial cells in the central nervous system (CNS). Astrocytes have a range of control and homeostatic functions in health and disease. Astrocytes assume a reactive phenotype in acute CNS trauma, ischemia, and in neurodegenerative diseases. This coincides with an upregulation and rearrangement of the IFs, which form a highly complex system composed of GFAP (10 isoforms), vimentin, synemin, and nestin. We begin to unravel the function of the IF system of astrocytes and in this review we discuss its role as an important crisis-command center coordinating cell responses in situations connected to cellular stress, which is a central component of many neurological diseases.