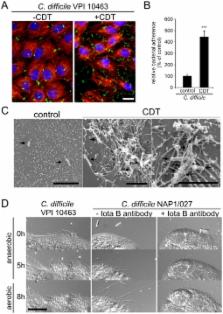 Clostridium difficile causes antibiotic-associated diarrhea and pseudomembranous colitis by production of the Rho GTPase-glucosylating toxins A and B. Recently emerging hypervirulent Clostridium difficile strains additionally produce the binary ADP-ribosyltransferase toxin CDT ( Clostridium difficile transferase), which ADP-ribosylates actin and inhibits actin polymerization. Thus far, the role of CDT as a virulence factor is not understood. Here we report by using time-lapse- and immunofluorescence microscopy that CDT and other binary actin-ADP-ribosylating toxins, including Clostridium botulinum C2 toxin and Clostridium perfringens iota toxin, induce redistribution of microtubules and formation of long (up to >150 µm) microtubule-based protrusions at the surface of intestinal epithelial cells. The toxins increase the length of decoration of microtubule plus-ends by EB1/3, CLIP-170 and CLIP-115 proteins and cause redistribution of the capture proteins CLASP2 and ACF7 from microtubules at the cell cortex into the cell interior. The CDT-induced microtubule protrusions form a dense meshwork at the cell surface, which wrap and embed bacterial cells, thereby largely increasing the adherence of Clostridia. The study describes a novel type of microtubule structure caused by less efficient microtubule capture and offers a new perspective for the pathogenetic role of CDT and other binary actin-ADP-ribosylating toxins in host–pathogen interactions.

Clostridium difficile is responsible for ∼20 percent of antibiotic-related cases of diarrhea and nearly all cases of pseudomembranous colitis. The pathogens produce two protein toxins (toxins A and B), which inactivate Rho-GTPases of host cells by glucosylation. Recently emerging hypervirulent strains of C. difficile release higher amounts of toxins A and B, are resistant towards fluoroquinolones and produce an additional protein toxin called C. difficile transferase (CDT). CDT is a binary toxin, which modifies G-actin by ADP-ribosylation, thereby inhibiting actin polymerization. So far the pathogenetic role of CDT is not clear. Here we studied the effects of CDT on human colon carcinoma cells and show that the toxin causes rearrangement of microtubules and formation of long cellular protrusions. The microtubule-based protrusions form a dense meshwork at the cell surface, which wrap and embed Clostridia, thereby increasing adherence of the pathogens. We observed similar effects with other members of the family of binary actin-ADP-ribosylating toxins like C. botulinum C2 toxin and C. perfringens iota toxin. Our findings show a novel type of microtubule structures induced by actin-ADP-ribosylating toxins and propose an important role of these toxins in host–pathogen interactions by their effects on adherence and colonization of Clostridia.

Sandrine Etienne-Manneville,  Alan Hall (2002)
Rho GTPases are molecular switches that control a wide variety of signal transduction pathways in all eukaryotic cells. They are known principally for their pivotal role in regulating the actin cytoskeleton, but their ability to influence cell polarity, microtubule dynamics, membrane transport pathways and transcription factor activity is probably just as significant. Underlying this biological complexity is a simple biochemical idea, namely that by switching on a single GTPase, several distinct signalling pathways can be coordinately activated. With spatial and temporal activation of multiple switches factored in, it is not surprising to find Rho GTPases having such a prominent role in eukaryotic cell biology.

Alan Hall,  David B. Jaffe (2004)
Approximately one percent of the human genome encodes proteins that either regulate or are regulated by direct interaction with members of the Rho family of small GTPases. Through a series of complex biochemical networks, these highly conserved molecular switches control some of the most fundamental processes of cell biology common to all eukaryotes, including morphogenesis, polarity, movement, and cell division. In the first part of this review, we present the best characterized of these biochemical pathways; in the second part, we attempt to integrate these molecular details into a biological context.

Susan Sambol,  Sophia V Kazakova,  Trent McDonald … (2005)
Recent reports suggest that the rate and severity of Clostridium difficile-associated disease in the United States are increasing and that the increase may be associated with the emergence of a new strain of C. difficile with increased virulence, resistance, or both. A total of 187 C. difficile isolates were collected from eight health care facilities in six states (Georgia, Illinois, Maine, New Jersey, Oregon, and Pennsylvania) in which outbreaks of C. difficile-associated disease had occurred between 2000 and 2003. The isolates were characterized by restriction-endonuclease analysis (REA), pulsed-field gel electrophoresis (PFGE), and toxinotyping, and the results were compared with those from a database of more than 6000 isolates obtained before 2001. The polymerase chain reaction was used to detect the recently described binary toxin CDT and a deletion in the pathogenicity locus gene, tcdC, that might result in increased production of toxins A and B. Isolates that belonged to one REA group (BI) and had the same PFGE type (NAP1) were identified in specimens collected from patients at all eight facilities and accounted for at least half of the isolates from five facilities. REA group BI, which was first identified in 1984, was uncommon among isolates from the historic database (14 cases). Both historic and current (obtained since 2001) BI/NAP1 isolates were of toxinotype III, were positive for the binary toxin CDT, and contained an 18-bp tcdC deletion. Resistance to gatifloxacin and moxifloxacin was more common in current BI/NAP1 isolates than in non-BI/NAP1 isolates (100 percent vs. 42 percent, P<0.001), whereas the rate of resistance to clindamycin was the same in the two groups (79 percent). All of the current but none of the historic BI/NAP1 isolates were resistant to gatifloxacin and moxifloxacin (P<0.001). A previously uncommon strain of C. difficile with variations in toxin genes has become more resistant to fluoroquinolones and has emerged as a cause of geographically dispersed outbreaks of C. difficile-associated disease. Copyright 2005 Massachusetts Medical Society.

Publisher ID: 09-PLPA-RA-0552R3
DOI: 10.1371/journal.ppat.1000626
PMC ID: 2757728
PubMed ID: 19834554
Copyright statement: Schwan et al. This is an open-access article distributed under the terms of the Creative Commons Attribution License, which permits unrestricted use, distribution, and reproduction in any medium, provided the original author and source are credited.