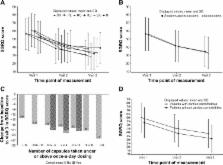 The long-acting inhaled anticholinergic agent, tiotropium, is recommended as first-line maintenance therapy for moderate to very severe Chronic Obstructive Pulmonary Disease (COPD) to improve symptoms, exercise tolerance, health status, and to reduce exacerbations. Few studies have evaluated the therapeutic efficacy of tiotropium in patients in routine clinical conditions. The current study was designed to investigate the therapeutic efficacy of tiotropium delivered via the HandiHaler® device on the health status of patients with COPD with Global initiative for chronic Obstructive Lung Disease (GOLD) disease classification 2–4 in six central and eastern European countries in a real-life clinical setting.

The study was an open-label, prospective, uncontrolled, and single-arm surveillance study with three clinic visits during a 6-month observation period (baseline, and months 3 and 6). Health status was measured using the disease-specific St George’s Respiratory Questionnaire (SGRQ). The primary efficacy endpoint was the mean change from baseline in SGRQ total score at the end of the 6-month observational period.

Patients treated with tiotropium 18 μg once daily showed statistically significant and clinically meaningful reduction (improvement) of 21.7 units in the SGRQ total score, regardless of smoking status or cardiac comorbidities at enrollment ( P < 0.0001). The analysis also showed that age, treatment compliance, and GOLD disease classification were significant factors that impact the health status of patients with COPD differently.

These results provide further support for the use of the tiotropium HandiHaler® as first-line maintenance treatment of patients with COPD with a clinician-assessed disease.

Sundeep S Salvi,  Peter Barnes (2009)
Chronic obstructive pulmonary disease (COPD) is a leading cause of morbidity and mortality worldwide. Tobacco smoking is established as a major risk factor, but emerging evidence suggests that other risk factors are important, especially in developing countries. An estimated 25-45% of patients with COPD have never smoked; the burden of non-smoking COPD is therefore much higher than previously believed. About 3 billion people, half the worldwide population, are exposed to smoke from biomass fuel compared with 1.01 billion people who smoke tobacco, which suggests that exposure to biomass smoke might be the biggest risk factor for COPD globally. We review the evidence for the association of COPD with biomass fuel, occupational exposure to dusts and gases, history of pulmonary tuberculosis, chronic asthma, respiratory-tract infections during childhood, outdoor air pollution, and poor socioeconomic status.

Jace W. Jones,  Yeon-Mok Oh (2005)
The SGRQ is a disease-specific measure of health status for use in COPD. A number of methods have been used for estimating its minimum clinically important difference (MCID). These include both expert and patient preference-based estimates. Anchor-based methods have also been used. The calculated MCID from those studies was consistently around 4 units, regardless of assessment method. By contrast, the MCID calculated using distribution-based methods varied across studies and permitted no consistent estimate. All measurements of clinical significance contain sample and measurement error. They also require value judgements, if not about the calculation of the MCID itself then about the anchors used to estimate it. Under these circumstances, greater weight should be placed upon the overall body of evidence for an MCID, rather than one single method. For that reason, estimates of MCID should be used as indicative values. Methods of analysing clinical trial results should reflect this, and use appropriate statistical tests for comparison with the MCID. Treatments for COPD that produced an improvement in SGRQ of the order of 4 units in clinical trials have subsequently found wide acceptance once in clinical practice, so it seems reasonable to expect any new treatment proposed for COPD to produce an advantage over placebo that is not significantly inferior to a 4-unit difference.