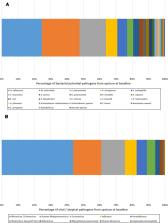 We used data from a trial evaluating a C-reactive protein (CRP) point of care guided approach to managing COPD exacerbations in primary care. We used regression analyses to identify baseline clinical features, including CRP value in those randomized to testing, associated with bacterial, viral or mixed infections, defined by the presence of bacterial and viral pathogens in sputum, detected by culture or polymerase chain reaction (PCR), respectively.

Relationship of sputum color to nature and outpatient management of acute exacerbations of COPD.

Robert A Stockley,  Christine O’Brien,  Anita Pye … (2000)
To stratify COPD patients presenting with an acute exacerbation on the basis of sputum color and to relate this to the isolation and viable numbers of bacteria recovered on culture. Open, longitudinal study of sputum characteristics and acute-phase proteins. Patients presenting to primary-care physicians in the United Kingdom. Patients were followed up as outpatients in specialist clinic. One hundred twenty-one patients with acute exacerbations of COPD were assessed together with a single sputum sample on the day of presentation (89 of whom produced a satisfactory sputum sample for analysis). One hundred nine patients were assessed 2 months later when they had returned to their stable clinical state. The expectoration of green, purulent sputum was taken as the primary indication for antibiotic therapy, whereas white or clear sputum was not considered representative of a bacterial episode and the need for antibiotic therapy. A positive bacterial culture was obtained from 84% of patients sputum if it was purulent on presentation compared with only 38% if it was mucoid (p < 0.0001). When restudied in the stable clinical state, the incidence of a positive bacterial culture was similar for both groups (38% and 41%, respectively). C-reactive protein concentrations were significantly raised (p < 0.0001) if the sputum was purulent (median, 4.5 mg/L; interquartile range [IQR], 6. 2 to 35.8). In the stable clinical state, sputum color improved significantly in the group who presented with purulent sputum from a median color number of 4.0 (IQR, 4.0 to 5.0) to 3.0 (IQR, 2.0 to 4. 0; p < 0.0001), and this was associated with a fall in median C-reactive protein level to 2.7 mg/L (IQR, 1.0 to 6.6; p < 0.0001). The presence of green (purulent) sputum was 94.4% sensitive and 77.0% specific for the yield of a high bacterial load and indicates a clear subset of patient episodes identified at presentation that is likely to benefit most from antibiotic therapy. All patients who produced white (mucoid) sputum during the acute exacerbation improved without antibiotic therapy, and sputum characteristics remained the same even when the patients had returned to their stable clinical state.

Impact of exacerbations on COPD.

C Spix,  D Zmirou-Navier,  G Touloumi … (1997)
We investigated the short-term effects of air pollution on hospital admissions for chronic obstructive pulmonary disease (COPD) in Europe. As part of a European project (Air Pollution and Health, a European Approach (APHEA)), we analysed data from the cities of Amsterdam, Barcelona, London, Milan, Paris and Rotterdam, using a standardized approach to data eligibility and statistical analysis. Relative risks for daily COPD admissions were obtained using Poisson regression, controlling for: seasonal and other cycles; influenza epidemics; day of the week; temperature; humidity and autocorrelation. Summary effects for each pollutant were estimated as the mean of each city's regression coefficients weighted by the inverse of the variance, allowing for additional between-cities variance, as necessary. For all ages, the relative risks (95% confidence limits (95% CL)) for a 50 microg x m(-3) increase in daily mean level of pollutant (lagged 1-3 days) were (95% CL): sulphur dioxide 1.02 (0.98, 1.06); black smoke 1.04 (1.01, 1.06); total suspended particulates 1.02 (1.00, 1.05), nitrogen dioxide 1.02 (1.00, 1.05) and ozone (8 h) 1.04 (1.02, 1.07). The results confirm that air pollution is associated with daily admissions for chronic obstructive pulmonary disease in European cities with widely varying climates. The results for particles and ozone are broadly consistent with those from North America, though the coefficients for particles are substantially smaller. Overall, the evidence points to a causal relationship but the mechanisms of action, exposure response relationships and pollutant interactions remain unclear.

This study is a secondary analysis of data collected by a project funded by the NIHR Health Technology Assessment Program (project number 12/33/12). The views expressed are those of the author(s) and not necessarily those of the NHS, the NIHR or the Department of Health. The work was undertaken with the support of: 1) The UK Clinical Research Collaboration (UKCRC) registered Clinical Trials Unit, the Centre for Trials Research, and funding from Health and Care Research Wales and Cancer Research UK, under the auspices of the UKCRC collaboration, is gratefully acknowledged, and; 2) The UK Clinical Research Collaboration (UKCRC) registered University of Oxford Primary Care and Vaccines Clinical Trials Collaborative.