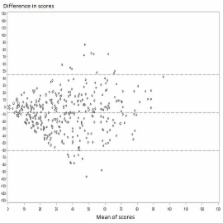 Patients experience an increasing treatment burden related to everything they do to take care of their health: visits to the doctor, medical tests, treatment management and lifestyle changes. This treatment burden could affect treatment adherence, quality of life and outcomes. We aimed to develop and validate an instrument for measuring treatment burden for patients with multiple chronic conditions.

Items were derived from a literature review and qualitative semistructured interviews with patients. The instrument was then validated in a sample of patients with chronic conditions recruited in hospitals and general practitioner clinics in France. Factor analysis was used to examine the questionnaire structure. Construct validity was studied by the relationships between the instrument's global score, the Treatment Satisfaction Questionnaire for Medication (TSQM) scores and the complexity of treatment as assessed by patients and physicians. Agreement between patients and physicians was appraised. Reliability was determined by a test-retest method.

This study provides the first valid and reliable instrument assessing the treatment burden for patients across any disease or treatment context. This instrument could help in the development of treatment strategies that are both efficient and acceptable for patients.

Elliot Bland, Michael Altman (1999)
Agreement between two methods of clinical measurement can be quantified using the differences between observations made using the two methods on the same subjects. The 95% limits of agreement, estimated by mean difference +/- 1.96 standard deviation of the differences, provide an interval within which 95% of differences between measurements by the two methods are expected to lie. We describe how graphical methods can be used to investigate the assumptions of the method and we also give confidence intervals. We extend the basic approach to data where there is a relationship between difference and magnitude, both with a simple logarithmic transformation approach and a new, more general, regression approach. We discuss the importance of the repeatability of each method separately and compare an estimate of this to the limits of agreement. We extend the limits of agreement approach to data with repeated measurements, proposing new estimates for equal numbers of replicates by each method on each subject, for unequal numbers of replicates, and for replicated data collected in pairs, where the underlying value of the quantity being measured is changing. Finally, we describe a nonparametric approach to comparing methods.

Relationship between adherence to evidence-based pharmacotherapy and long-term mortality after acute myocardial infarction.

Jeppe Rasmussen, Alice Chong, David Alter (2007)
The extent to which drug adherence may affect survival remains unclear, in part because mortality differences may be attributable to "healthy adherer" behavioral attributes more so than to pharmacological benefits. To explore the relationship between drug adherence and mortality in survivors of acute myocardial infarction (AMI). Population-based, observational, longitudinal study of 31 455 elderly AMI survivors between 1999 and 2003 in Ontario. All patients filled a prescription for statins, beta-blockers, or calcium channel blockers, with the latter drug considered a control given the absence of clinical trial-proven survival benefits. Patient adherence was subdivided a priori into 3 categories--high (proportion of days covered, > or =80%), intermediate (proportion of days covered, 40%-79%), and low (proportion of days covered, <40%)--and compared with long-term mortality (median of 2.4 years of follow-up) using multivariable survival models (and propensity analyses) adjusted for sociodemographic factors, illness severity, comorbidities, and concomitant use of evidence-based therapies. Among statin users, compared with their high-adherence counterparts, the risk of mortality was greatest for low adherers (deaths in 261/1071 (24%) vs 2310/14,345 (16%); adjusted hazard ratio, 1.25; 95% confidence interval, 1.09-1.42; P = .001) and was intermediary for intermediate adherers (deaths in 472/2407 (20%); adjusted hazard ratio, 1.12; 95% confidence interval, 1.01-1.25; P = .03). A similar but less pronounced dose-response-type adherence-mortality association was observed for beta-blockers. Mortality was not associated with adherence to calcium channel blockers. Moreover, sensitivity analyses demonstrated no relationships between drug adherence and cancer-related admissions, outcomes for which biological plausibility do not exist. The long-term survival advantages associated with improved drug adherence after AMI appear to be class-specific, suggesting that adherence outcome benefits are mediated by drug effects and do not merely reflect an epiphenomenon of "healthy adherer" behavioral attributes.

J P M Denekens, H Hearnshaw, E Vermeire … (2001)
Low compliance to prescribed medical interventions is an ever present and complex problem, especially for patients with a chronic illness. With increasing numbers of medications shown to do more good than harm when taken as prescibed, low compliance is a major problem in health care. Relevant studies were retrieved through comprehensive searches of different database systems to enable a thorough assessment of the major issues in compliance to prescribed medical interventions. The term compliance is the main term used in this review because the majority of papers reviewed used this term. Three decades have passed since the first workshop on compliance research. It is timely to pause and to reflect on the accumulated knowledge. The enormous amount of quantitative research undertaken is of variable methodological quality, with no gold standard for the measurement of compliance and it is often not clear which type of non-compliance is being studied. Many authors do not even feel the need to define adherence. Often absent in the research on compliance is the patient, although the concordance model points at the importance of the patient's agreement and harmony in the doctor-patient relationship. The backbone of the concordance model is the patient as a decision maker and a cornerstone is professional empathy. Recently, some qualitative research has identified important issues such as the quality of the doctor-patient relationship and patient health beliefs in this context. Because non-compliance remains a major health problem, more high quality studies are needed to assess these aspects and systematic reviews/meta-analyses are required to study the effects of compliance in enhancing the effects of interventions.