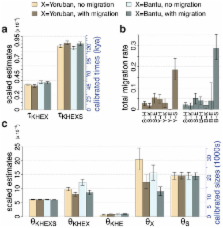 Besides their value for biomedicine, individual genome sequences are a rich source of information about human evolution. Here we describe an effort to estimate key evolutionary parameters from sequences for six individuals from diverse human populations. We use a Bayesian, coalescent-based approach to extract information about ancestral population sizes, divergence times, and migration rates from inferred genealogies at many neutrally evolving loci from across the genome. We introduce new methods for accommodating gene flow between populations and integrating over possible phasings of diploid genotypes. We also describe a custom pipeline for genotype inference to mitigate biases from heterogeneous sequencing technologies and coverage levels. Our analysis indicates that the San of Southern Africa diverged from other human populations 108–157 thousand years ago (kya), that Eurasians diverged from an ancestral African population 38–64 kya, and that the effective population size of the ancestors of all modern humans was ~9,000.

The genetic structure and history of Africans and African Americans.

S. A. Tishkoff,  F. A. Reed,  F. R. Friedlaender … (2009)
Africa is the source of all modern humans, but characterization of genetic variation and of relationships among populations across the continent has been enigmatic. We studied 121 African populations, four African American populations, and 60 non-African populations for patterns of variation at 1327 nuclear microsatellite and insertion/deletion markers. We identified 14 ancestral population clusters in Africa that correlate with self-described ethnicity and shared cultural and/or linguistic properties. We observed high levels of mixed ancestry in most populations, reflecting historical migration events across the continent. Our data also provide evidence for shared ancestry among geographically diverse hunter-gatherer populations (Khoesan speakers and Pygmies). The ancestry of African Americans is predominantly from Niger-Kordofanian (approximately 71%), European (approximately 13%), and other African (approximately 8%) populations, although admixture levels varied considerably among individuals. This study helps tease apart the complex evolutionary history of Africans and African Americans, aiding both anthropological and genetic epidemiologic studies.

The Apportionment of Human Diversity

Ziheng Yang,  Bruce Rannala (2003)
The effective population sizes of ancestral as well as modern species are important parameters in models of population genetics and human evolution. The commonly used method for estimating ancestral population sizes, based on counting mismatches between the species tree and the inferred gene trees, is highly biased as it ignores uncertainties in gene tree reconstruction. In this article, we develop a Bayes method for simultaneous estimation of the species divergence times and current and ancestral population sizes. The method uses DNA sequence data from multiple loci and extracts information about conflicts among gene tree topologies and coalescent times to estimate ancestral population sizes. The topology of the species tree is assumed known. A Markov chain Monte Carlo algorithm is implemented to integrate over uncertain gene trees and branch lengths (or coalescence times) at each locus as well as species divergence times. The method can handle any species tree and allows different numbers of sequences at different loci. We apply the method to published noncoding DNA sequences from the human and the great apes. There are strong correlations between posterior estimates of speciation times and ancestral population sizes. With the use of an informative prior for the human-chimpanzee divergence date, the population size of the common ancestor of the two species is estimated to be approximately 20,000, with a 95% credibility interval (8000, 40,000). Our estimates, however, are affected by model assumptions as well as data quality. We suggest that reliable estimates have yet to await more data and more realistic models.