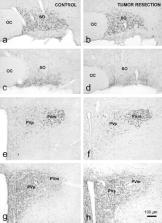 The immune and neuroendocrine systems are closely involved in the regulation of metabolism at peripheral and central hypothalamic levels. In both physiological (meals) and pathological (infections, traumas and tumors) conditions immune cells are activated responding with the release of cytokines and other immune mediators (afferent signals). In the hypothalamus (central integration), cytokines influence metabolism by acting on nucleus involved in feeding and homeostasis regulation leading to the acute phase response (efferent signals) aimed to maintain the body integrity.

Peripheral administration of cytokines, inoculation of tumor and induction of infection alter, by means of cytokine action, the normal pattern of food intake affecting meal size and meal number suggesting that cytokines acted differentially on specific hypothalamic neurons. The effect of cytokines-related cancer anorexia is also exerted peripherally. Increase plasma concentrations of insulin and free tryptophan and decrease gastric emptying and d-xylose absorption. In addition, in obesity an increase in interleukin (IL)-1 and IL-6 occurs in mesenteric fat tissue, which together with an increase in corticosterone, is associated with hyperglycemia, dyslipidemias and insulin resistance of obesity-related metabolic syndrome. These changes in circulating nutrients and hormones are sensed by hypothalamic neurons that influence food intake and metabolism.

In anorectic tumor-bearing rats, we detected upregulation of IL-1β and IL-1 receptor mRNA levels in the hypothalamus, a negative correlation between IL-1 concentration in cerebro-spinal fluid and food intake and high levels of hypothalamic serotonin, and these differences disappeared after tumor removal. Moreover, there is an interaction between serotonin and IL-1 in the development of cancer anorexia as well as an increase in hypothalamic dopamine and serotonin production. Immunohistochemical studies have shown a decrease in neuropeptide Y (NPY) and dopamine (DA) and an increase in serotonin concentration in tumor-bearing rats, in first- and second-order hypothalamic nuclei, while tumor resection reverted these changes and normalized food intake, suggesting negative regulation of NPY and DA systems by cytokines during anorexia, probably mediated by serotonin that appears to play a pivotal role in the regulation of food intake in cancer.

Among the different forms of therapy, nutritional manipulation of diet in tumor-bearing state has been investigated. Supplementation of tumor bearing rats with ω-3 fatty acid vs. control diet delayed the appearance of tumor, reduced tumor-growth rate and volume, negated onset of anorexia, increased body weight, decreased cytokines production and increased expression of NPY and decreased α-melanocyte-stimulating hormone (α-MSH) in hypothalamic nuclei. These data suggest that ω-3 fatty acid suppressed pro-inflammatory cytokines production and improved food intake by normalizing hypothalamic food intake-related peptides and point to the possibility of a therapeutic use of these fatty acids.

The sum of these data support the concept that immune cell-derived cytokines are closely related with the regulation of metabolism and have both central and peripheral actions, inducing anorexia via hypothalamic anorectic factors, including serotonin and dopamine, and inhibiting NPY leading to a reduction in food intake and body weight, emphasizing the interconnection of the immune and neuroendocrine systems in regulating metabolism during infectious process, cachexia and obesity.

Giamila Fantuzzi (2005)
White adipose tissue is no longer considered an inert tissue mainly devoted to energy storage but is emerging as an active participant in regulating physiologic and pathologic processes, including immunity and inflammation. Macrophages are components of adipose tissue and actively participate in its activities. Furthermore, cross-talk between lymphocytes and adipocytes can lead to immune regulation. Adipose tissue produces and releases a variety of proinflammatory and anti-inflammatory factors, including the adipokines leptin, adiponectin, resistin, and visfatin, as well as cytokines and chemokines, such as TNF-alpha, IL-6, monocyte chemoattractant protein 1, and others. Proinflammatory molecules produced by adipose tissue have been implicated as active participants in the development of insulin resistance and the increased risk of cardiovascular disease associated with obesity. In contrast, reduced leptin levels might predispose to increased susceptibility to infection caused by reduced T-cell responses in malnourished individuals. Altered adipokine levels have been observed in a variety of inflammatory conditions, although their pathogenic role has not been completely clarified.

Mats Rudling,  Claes Ohlsson,  Kristina Wallenius … (2001)
The immune-modulating cytokine interleukin-6 (IL-6) is expressed both in adipose tissue and centrally in hypothalamic nuclei that regulate body composition. We investigated the impact of loss of IL-6 on body composition in mice lacking the gene encoding IL-6 (Il6-/- mice) and found that they developed mature-onset obesity that was partly reversed by IL-6 replacement. The obese Il6-/- mice had disturbed carbohydrate and lipid metabolism, increased leptin levels and decreased responsiveness to leptin treatment. To investigate the possible mechanism and site of action of the anti-obesity effect of IL-6, we injected rats centrally and peripherally with IL-6 at low doses. Intracerebroventricular, but not intraperitoneal IL-6 treatment increased energy expenditure. In conclusion, centrally acting IL-6 exerts anti-obesity effects in rodents.