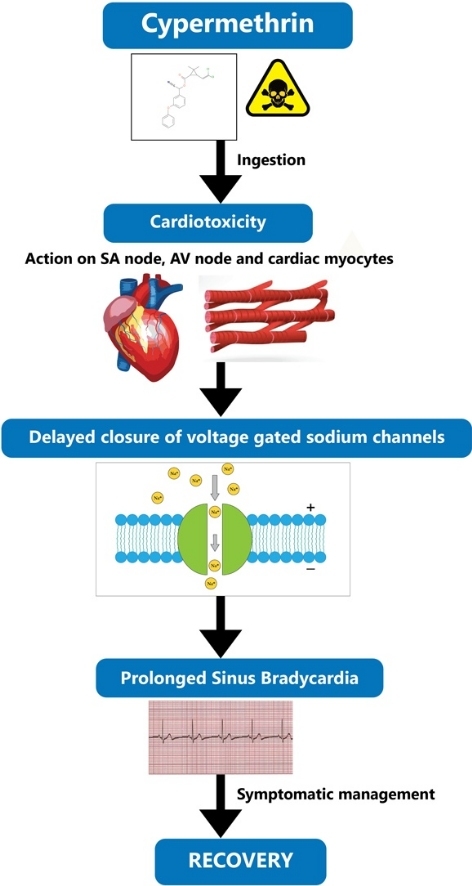 Pyrethrins and their synthetic derivatives known as pyrethroids are highly effective insecticides used worldwide in the agricultural fields and households. Cypermethrin is a type II pyrethroid which acts primarily by delaying the closure of voltage-sensitive sodium channels at higher concentrations. Its toxicity in humans occur due to accidental or intentional exposure through inhalation, skin contact or via ingestion. Acute oral intoxication of cypermethrin commonly manifests with neurotoxic and gastrointestinal effects in humans. Cardiotoxic effects following ingestion of this compound have occurred in a few cases but underreported to date. This case highlights a case of intentional cypermethrin poisoning with acute effects in the form of prolonged bradycardia symptomatically managed with a muscarinic antagonist like atropine sulphate.

Poisoning due to Pyrethroids

Cardiotoxicity in rabbits after a low-level exposure to diazinon, propoxur, and chlorpyrifos.

A Zafiropoulos,  K Tsarouhas,  C Tsitsimpikou … (2014)
Lethal cardiac complications leading to death and various arrhythmias have been reported after organophosphate and/or carbamate poisonings. The present study focuses on the long-term effects of repeated low-level exposure to diazinon, propoxur, and chlorpyrifos (CPF) on cardiac function in rabbits. The yearly based experimental scheme of exposure consisted of two oral administration periods, lasting 3 months and 1 month each, interrupted by an 8-month washout period (total duration 12 months). At the end of the experimental scheme, the rabbits underwent an echocardiographic evaluation under sedation, after which they were killed and the tissue and serum samples were collected. A mild localized cardiotoxic effect was established by echocardiography for the three pesticides tested. Severe histological alterations were identified, especially in the diazinon-treated animals in agreement with increased persistence of this pesticide established in the cardiac tissue. In addition, all pesticides tested increased the oxidative stress and oxidative modifications in the genomic DNA content of the cardiac tissues, each one following a distinct mechanism.

Pesticides and cardiotoxicity. Where do we stand?