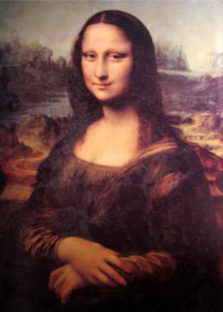 Leonardo da Vinci was born in Italy. Among the researchers and scientists, he is favourably known for his remarkable efforts in scientific work. His investigations of atherosclerosis judiciously combine three separate fields of research. In 1506, he finished his masterpiece, painting of Mona Lisa. A careful clinical examination of the famous painting reveals a yellow irregular leather-like spot at the inner end of the left upper eyelid and a soft bumpy well-defined swelling of the dorsum of the right hand beneath the index finger about 3 cm long. This is probably the first case of familial hypercholesterolemia (FH). The FH code of Leonardo da Vinci was given immense consideration by scientists like Carl Muller, who described the xanthomas tuberosum and angina pectoris. On the contrary, Akira Endo searched for microbial metabolites that would inhibit HMG-CoA reductase, the rate-limiting enzyme in the synthesis of cholesterol and finally, Michael Brown and Joseph Goldstein published a remarkable series of elegant and insightful papers in the 70s and 80s. They established that the cellular uptake of low-density lipoprotein (LDL) essentially requires the LDL receptor. In conclusion: this was the real Code of Leonardo da Vinci.

The discovery and development of HMG-CoA reductase inhibitors.

Taryn E. Ludwig,  Miguel Soria,  Rohan H. Clarke … (1988)
Familial defective apolipoprotein (apo) B-100 is a genetic disease that leads to hypercholesterolemia and to an increased serum concentration of low density lipoproteins that bind defectively to the apoB,E(LDL) receptor. The disorder appears to result from a mutation in the gene for apoB-100. Extensive sequence analysis of the two alleles of one subject heterozygous for the disorder has revealed a previously unreported mutation in the codon for amino acid 3500 that results in the substitution of glutamine for arginine. This same mutant allele occurs in six other, unrelated subjects and in eight affected relatives in two of these families. A partial haplotype of this mutant apoB-100 allele was constructed by sequence analysis and restriction enzyme digestion at positions where variations in the apoB-100 are known to occur. This haplotype is the same in three probands and four affected members of one family and lacks a polymorphic Xba I site whose presence has been correlated with high cholesterol levels. Thus, it appears that the mutation in the codon for amino acid 3500 (CGG----CAG), a CG mutational "hot spot," defines a minor apoB-100 allele associated with defective low density lipoproteins and hypercholesterolemia.

Leiv Ose (2002)
The first patients with xanthomatosis and cardiovascular disease were described in end of the 18th century. From 1925 to 1938, the Norwegian pathologist Francis Harbitz (1867-1950) published several reports on sudden death and xanthomatosis. Harbitz called attention to certain peculiarities of the xanthomatosis. Microscopically he found that the so-called foam cells are more marked and more characteristic than in senile arteriosclerosis. Carl Müller's (1886-1983) attention was directed to this form of cardiovascular disease by the publications of Harbitz. Based on his own studies of 17 families in Oslo over a short period from 1936, he published his final report in 1939. He described hereditary heart disease due to xanthomatosis and hypercholesterolaemia to be fairly common. It was demonstrated to be a dominant trait in the families. Hypercholesterolaemia was present, most marked in connection with xanthoma tuberosus, but there was no definitive relationship between hypercholesterolaemia and xanthomatous deposits in the skin. The occurrence of heart disease in families should direct attention to this disorder. Carl Müller postulated that causal and prophylactic treatment might prove to be of value, but more than 50 years passed before this was possible in the disorder that is now called familial hypercholesterolaemia.