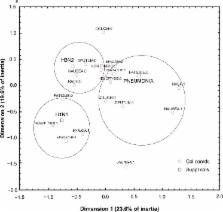 Influenza A H1N1 and H3N2 are two influenza waves that have been identified in past years.

Data from 77 inpatients from three tertiary hospitals were included and statistical analysis was performed in three different clusters.

Thirty-four patients (44.2%) had respiratory distress upon admission, 31.2% had a smoking history or were active smokers, 37.7% manifested disease symptoms, and 7.8% were obese (body mass index >41). The mean age of patients was 51.1 years. Cough was the most common symptom observed in 77.9% of the patients, accompanied by sputum production (51.9%) and fatigue (42.9%). Hemoptysis and vomiting were rarely recorded in the patients (9.1% and 16.9%, respectively). Oseltamivir administration varied between 0 and 10 days, giving a mean value of 2.2 days. In particular, 19 patients received no drug, 31 patients received drug for only for 1 day, 19 patients for 5 days, and 8 patients from 2 to 10 days.

Clusters of symptoms can be used to identify different types of influenza and disease severity. Patients with vaccination had pneumonia, whereas patients without vaccination had influenza A. Patients more than 54.5 years old had H3N2 and patients less than 54.5 years had H1N1. White blood cell count values increased from normal to elevated in H3N2 patients but still remained abnormal in lower tract infection and H1N1 patients.

T Fanning,  Ruixue Wang,  Raina M. Lourens … (2005)
The influenza A viral heterotrimeric polymerase complex (PA, PB1, PB2) is known to be involved in many aspects of viral replication and to interact with host factors, thereby having a role in host specificity. The polymerase protein sequences from the 1918 human influenza virus differ from avian consensus sequences at only a small number of amino acids, consistent with the hypothesis that they were derived from an avian source shortly before the pandemic. However, when compared to avian sequences, the nucleotide sequences of the 1918 polymerase genes have more synonymous differences than expected, suggesting evolutionary distance from known avian strains. Here we present sequence and phylogenetic analyses of the complete genome of the 1918 influenza virus, and propose that the 1918 virus was not a reassortant virus (like those of the 1957 and 1968 pandemics), but more likely an entirely avian-like virus that adapted to humans. These data support prior phylogenetic studies suggesting that the 1918 virus was derived from an avian source. A total of ten amino acid changes in the polymerase proteins consistently differentiate the 1918 and subsequent human influenza virus sequences from avian virus sequences. Notably, a number of the same changes have been found in recently circulating, highly pathogenic H5N1 viruses that have caused illness and death in humans and are feared to be the precursors of a new influenza pandemic. The sequence changes identified here may be important in the adaptation of influenza viruses to humans.

S. Sung,  Kelvin K. W. To,  Hunter K. L. Yuen … (1998)
Human infection with an avian influenza A virus (subtype H5N1) was reported recently in Hong Kong. We describe the clinical presentation of the first 12 patients and options for rapid viral diagnosis. Case notes of 12 patients with virus-culture-confirmed influenza A H5N1 infection were analysed. The clinical presentation and risk factors associated with severe disease were defined and the results of methods for rapid virus diagnosis were compared. Patients ranged from 1 to 60 years of age. Clinical presentation was that of an influenza-like illness with evidence of pneumonia in seven patients. All seven patients older than 13 years had severe disease (four deaths), whereas children 5 years or younger had mild symptoms with the exception of one who died with Reye's syndrome associated with intake of aspirin. Gastrointestinal manifestations, raised liver enzymes, renal failure unrelated to rhabdomyolysis, and pancytopenia were unusually prominent. Factors associated with severe disease included older age, delay in hospitalisation, lower-respiratory-tract involvement, and a low total peripheral white blood cell count or lymphopenia at admission. An H5-specific reverse-transcription PCR assay (RT-PCR) was useful for rapid detection of virus directly in respiratory specimens. A commercially available enzyme immunoassay was more sensitive than direct immunofluorescence for rapid viral diagnosis. Direct immunofluorescence with an H5-specific monoclonal antibody pool was useful for rapid exclusion of H5-subtype infection. Avian Influenza A H5N1 virus causes human influenza-like illness with a high rate of complications in adults admitted to hospital. Rapid H5-subtype-specific laboratory diagnosis can be made by RT-PCR applied directly to clinical specimens.

Cases of swine influenza in humans: a review of the literature.

Kenneth Olsen,  Linda K Myers,  C. G. Gray (2007)
As the threat of a pandemic looms, improvement in our understanding of interspecies transmission of influenza is necessary. Using the search terms "swine," "influenza," and "human," we searched the PubMed database in April 2006 to identify publications describing symptomatic infections of humans with influenza viruses of swine origin. From these reports, we extracted data regarding demographic characteristics, epidemiological investigations, and laboratory results. We found 50 cases of apparent zoonotic swine influenza virus infection, 37 of which involved civilians and 13 of which involved military personnel, with a case-fatality rate of 14% (7 of 50 persons). Most civilian subjects (61%) reported exposure to swine. Although sporadic clinical cases of swine influenza occur in humans, the true incidence of zoonotic swine influenza virus infection is unknown. Because prior studies have shown that persons who work with swine are at increased risk of zoonotic influenza virus infection, it is prudent to include them in pandemic planning efforts.