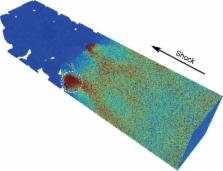 Meteorites represent the only samples available for study on Earth of a number of planetary bodies. The minerals within meteorites therefore hold the key to addressing numerous questions about our solar system. Of particular interest is the Ca-phosphate mineral merrillite, the anhydrous end-member of the merrillite–whitlockite solid solution series. For example, the anhydrous nature of merrillite in Martian meteorites has been interpreted as evidence of water-limited late-stage Martian melts. However, recent research on apatite in the same meteorites suggests higher water content in melts. One complication of using meteorites rather than direct samples is the shock compression all meteorites have experienced, which can alter meteorite mineralogy. Here we show whitlockite transformation into merrillite by shock-compression levels relevant to meteorites, including Martian meteorites. The results open the possibility that at least part of meteoritic merrillite may have originally been H +-bearing whitlockite with implications for interpreting meteorites and the need for future sample return.

Quantifying the amount of water in meteorites remains challenging, with minerals the key to understanding water contents. Here, Adcock et al. perform shock experiments on H +-bearing whitlockite demonstrating that it may transform into anhydrous merrillite, which is commonly found in Martian meteorites.

Béatrice Gerland,  Matthew W Powner,  Laura J. Sutherland (2009)
At some stage in the origin of life, an informational polymer must have arisen by purely chemical means. According to one version of the 'RNA world' hypothesis this polymer was RNA, but attempts to provide experimental support for this have failed. In particular, although there has been some success demonstrating that 'activated' ribonucleotides can polymerize to form RNA, it is far from obvious how such ribonucleotides could have formed from their constituent parts (ribose and nucleobases). Ribose is difficult to form selectively, and the addition of nucleobases to ribose is inefficient in the case of purines and does not occur at all in the case of the canonical pyrimidines. Here we show that activated pyrimidine ribonucleotides can be formed in a short sequence that bypasses free ribose and the nucleobases, and instead proceeds through arabinose amino-oxazoline and anhydronucleoside intermediates. The starting materials for the synthesis-cyanamide, cyanoacetylene, glycolaldehyde, glyceraldehyde and inorganic phosphate-are plausible prebiotic feedstock molecules, and the conditions of the synthesis are consistent with potential early-Earth geochemical models. Although inorganic phosphate is only incorporated into the nucleotides at a late stage of the sequence, its presence from the start is essential as it controls three reactions in the earlier stages by acting as a general acid/base catalyst, a nucleophilic catalyst, a pH buffer and a chemical buffer. For prebiotic reaction sequences, our results highlight the importance of working with mixed chemical systems in which reactants for a particular reaction step can also control other steps.

DIOPTAS: a program for reduction of two-dimensional X-ray diffraction data and data exploration