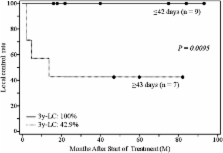 A combination of external beam radiotherapy (EBRT) and intracavitary brachytherapy (ICBT) is well established as the standard radical radiotherapy (RT) for cervical cancer. However, it is sometimes necessary to perform EBRT alone for patients where ICBT is not feasible. For these patients, we initiated EBRT alone with three-dimensional conformal radiotherapy (3DCRT). The purpose of this study is to evaluate the results of EBRT alone without ICBT for patients with cervical cancer. Sixteen patients were treated with EBRT alone between 2002 and 2009. There were three stage IIB, six stage IIIB and seven patients with stage IVA disease. A total of 10 patients were treated with a median dose of 66 Gy with a median overall treatment time (OTT) of 40 days delivered by a concomitant boost (CCB), and a median dose of 60 Gy with a median OTT of 47 days was administered for six patients by conventional fractionation (CF). The 3-year overall survival (OAS) and local control (LC) rates were 43.8% and 75.0%, respectively. The 3-year LC rate was 90.0% for the CCB group, 50.0% for the CF group ( P = 0.0692); 100% for OTT ≤42 days, 42.9% for OTT ≥43 days ( P = 0.0095). No severe acute and late adverse effects were encountered for any of the patients. These outcomes suggest that EBRT with a CCB program may be a promising radical treatment for cervical cancer that provides better LC with minimal complications, especially in cases where ICBT cannot be performed.

Survival and recurrence after concomitant chemotherapy and radiotherapy for cancer of the uterine cervix: a systematic review and meta-analysis.

J. Kirwan,  P. Symonds,  L Fresco … (2001)
The US National Cancer Institute alert in February, 1999, stated that concomitant chemotherapy and radiotherapy should be considered for all patients with cervical cancer. Our aim was to review the effects of chemoradiotherapy on overall and progression-free survival, local and distant control, and acute and late toxicity in patients with cervical cancer. With the methodology of the Cochrane Collaboration, we did a systematic review of all known randomised controlled trials done between 1981 and 2000 (17 published, two unpublished) of chemoradiation for cervical cancer. The trials included 4580 randomised patients, and 2865-3611 patients (62-78%) were available for analysis. Cisplatin was the most common agent used. The findings suggest that chemoradiation improves overall survival (hazard ratio 0.71, p<0.0001), whether platinum was used (0.70, p<0.0001) or not (0.81, p=0.20). A greater beneficial effect was seen in trials that included a high proportion of stage I and II patients (p=0.009). An improvement in progression-free survival was also seen with chemoradiation (0.61, p<0.0001). Thus, the absolute benefit in progression-free and overall survival was 16% (95% CI 13-19) and 12% (8-16), respectively. A significant benefit of chemoradiation on both local (odds ratio 0.61, p<0.0001) and distant recurrence (0.57, p<0.0001) was also recorded. Grade 3 or 4 haematological (odds ratio 1.49-8.60) and gastrointestinal (2.22) toxicities were significantly greater in the concomitant chemoradiation group than the control group. There was insufficient data to establish whether late toxicity was increased in the concomitant chemoradiation group. Concomitant chemotherapy and radiotherapy improves overall and progression-free survival and reduces local and distant recurrence in selected patients with cervical cancer, which may give a cytotoxic and sensitisation effect.

Carcinoma of the uterine cervix. I. Impact of prolongation of overall treatment time and timing of brachytherapy on outcome of radiation therapy.

Vinicio A De Jesus Perez,  P Grigsby,  Michelle Lockett … (1995)
Some studies have described decreased pelvic tumor control and survival rates in invasive carcinoma of uterine cervix when the overall time in a course of definitive irradiation is prolonged. We attempt to confirm or deny these observations and evaluate the impact of timing of brachytherapy on outcome. We also explore the hypothesis that more extensive tumors technically require prolongation of the course of irradiation; thus, decreased tumor control and survival in these patients may not necessarily be the result of time/dose factor. Records of 1,224 patients (Stage IB to III) treated with definitive irradiation (combination of external beam and two intracavitary insertions to deliver doses of 70 to 90 Gy to point A) were reviewed. Follow-up was obtained in 97% of the patients (median, 12 years; minimum, 3 years; maximum, 28 years). The relationship between outcome and overall treatment time and time of intracavitary insertions was analyzed in each stage and according to tumor size/extent. There was strong correlation between overall treatment time (OTT) and tumor stage ( 9 weeks (p or = 9 weeks (p 9 weeks (p = 0.01). Patients with Stage III disease had 45% 10-year CSS when treatment was delivered in 9 weeks or less and 36% for longer overall times (p = 0.16). In multivariate analysis of patients with Stage IB and IIA, OTT and clinical stage were the most important prognostic factors for pelvic tumor control, disease-free survival, and CSS. Tumor size was a prognostic factor for CSS. In Stages IIB and III, OTT, clinical stage, unilateral or bilateral parametrial invasion, and dose to point A were significant prognostic factors for pelvic tumor control, disease-free survival, and CSS. Prolongation of time had a significant impact on pelvic tumor control and CSS regardless of tumor size, except in Stage IB tumors or = 85 Gy to point A. Performance of all intracavitary insertions within 4.5 weeks from initiation of irradiation yielded decreased pelvic failure rates in some groups of patients (8.8 vs. 18% in Stage IB and IIA tumors < or = 4 cm and 12.3 vs. 35% in Stage IIB) (p < or = 0.01). Prolongation of treatment time in patients with Stage IB, IIA, IIB, and III carcinoma of the uterine cervix has a significant impact on pelvic tumor control and CSS. The effect of OTT was present regardless of tumor size except in Stage IB tumors < or = 3 cm.

Impact of intensity-modulated radiotherapy on acute hematologic toxicity in women with gynecologic malignancies.

Clark J Brixey,  Marla E Lujan,  Tina C. Roeske … (2002)
To evaluate the impact of intensity-modulated whole pelvic radiotherapy (IM-WPRT) on acute hematologic toxicity (HT) in gynecology patients. Between February 2000 and June 2001, 36 patients (24 cervix, 12 uterus) received IM-WPRT. The target consisted of the upper vagina, parametria, uterus, and presacral and pelvic lymph nodes. Using commercially available software, seven or nine coplanar IM-WPRT plans were generated. The planning goals were to irradiate the target while minimizing the dose to the small bowel, bladder, and rectum. Pelvic bone marrow (BM) was not a constraint in the planning process. The variables analyzed included white blood count (WBC), absolute neutrophil count (ANC), platelets, and hemoglobin (Hgb) obtained before and weekly during RT. As a comparison, the HT in 88 patients (44 cervix, 44 uterus) treated to the same target volume and total dose (45 Gy) with conventional four-field WPRT was analyzed. In addition, the medullary spaces within the pelvic bones in 10 women were contoured and the average dose-volume histograms representing the pelvic BM were compared between the two groups. IM-WPRT patients had a lower median age (p = 0.008), higher percentage of squamous histologic features (p = 0.04), and were more likely to receive chemotherapy (CTX) (p = 0.02) than were the WPRT patients. No differences were seen in the baseline WBC, ANC, platelet, or Hgb levels between the two groups. Grade 2 or greater WBC, ANC, and Hgb toxicity was seen in 19.4%, 9.1%, and 8.6% of the IM-WPRT patients, respectively. Comparable rates were seen in the WPRT patients (WBC 21.6%, p = 0.79; ANC 8.3%, p = 0.91; Hgb 9.2%, p = 0.94). No Grade 2 or greater platelet toxicity was seen in either group. Significant HT was infrequent in women treated with RT alone and was comparable in the two groups. In contrast, WPRT + CTX patients experienced more Grade 2 or greater WBC toxicity (60% vs. 31.2%, p = 0.08) and developed lower median WBC (2.8 vs. 3.6 microg/dL, p = 0.05) and ANC (1874 vs. 2669, p = 0.04) nadirs than did IM-WPRT + CTX patients. Moreover, CTX was held more often in the WPRT group secondary to HT (40% vs. 12.5%, p = 0.06). Although Grade 2 or greater ANC (23.5% vs. 15.3%) and Hgb (35.2% vs. 15.2%) toxicity were lower in the IM-WPRT + CTX group, these differences did not reach statistical significance (p = 0.58 and p = 0.22, respectively). The comparison of pelvic BM dose-volume histograms revealed that IM-WPRT planning resulted in significantly less BM volume being irradiated compared with WPRT planning, particularly within the iliac crests. IM-WPRT has a favorable impact on the risk of acute HT in gynecology patients, particularly in those receiving CTX. Future work is needed to optimize BM sparing in these patients to reduce the risk of significant HT further.