Evidence and mapping of extinction debts for global forest-dwelling reptiles, amphibians and mammals 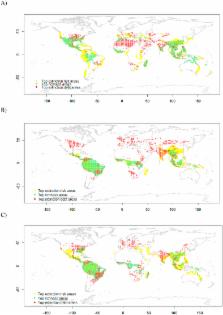 Evidence of extinction debts for the global distributions of forest-dwelling reptiles, mammals and amphibians was tested and the debt magnitude was estimated and mapped. By using different correlation tests and variable importance analysis, the results showed that spatial richness patterns for the three forest-dwelling terrestrial vertebrate groups had significant and stronger correlations with past forest cover area and other variables in the 1500 s, implying the evidence for extinction debts. Moreover, it was likely that the extinction debts have been partially paid, given that their global richness patterns were also significantly correlated with contemporary forest variables in the 2000 s (but the absolute magnitudes of the correlation coefficients were usually smaller than those calculated for historical forest variables). By utilizing species-area relationships, spatial extinction-debt magnitudes for the three vertebrate groups at the global scale were estimated and the hotspots of extinction debts were identified. These high-debt hotspots were generally situated in areas that did not spatially overlap with hotspots of species richness or high extinction-risk areas based on IUCN threatened status to a large extent. This spatial mismatch pattern suggested that necessary conservation efforts should be directed toward high-debt areas that are still overlooked.

F Sax,  William Jackson (2010)
Here, we outline a conceptual framework for biodiversity dynamics following environmental change. The model incorporates lags in extinction and immigration, which lead to extinction debt and immigration credit, respectively. Collectively, these concepts enable a balanced consideration of changes in biodiversity following climate change, habitat fragmentation and other forcing events. They also reveal transient phenomena, such as biodiversity surpluses and deficits, which have important ramifications for biological conservation and the preservation of ecosystem services. Predicting such transient dynamics poses a serious conservation challenge in a time of rapid environmental change.