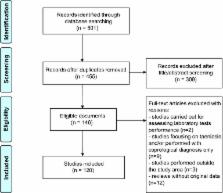 Cysticercosis is caused by the larvae of the cestode Taenia solium. Few data are available on the prevalence of this disease in pigs and humans in West African countries. The aim of this study was to provide an overview of existing data concerning the spread of this parasitosis in the countries of the Economic Community of West African States (ECOWAS) on the basis of the literature published over the last five decades. Systematic searches for publications were carried out on PubMed and Google Scholar, as well as in certain regional and local journals. From a total of 501 articles initially retrieved concerning T. solium cysticercosis in West African countries, only 120 articles were relevant for this review and therefore finally retained. For pigs, only eight out of sixteen countries of the region have reported porcine cysticercosis. Post-mortem examination of carcasses at slaughterhouses, meat inspection at butcheries or tongue inspection in herds have been the main source of data, but may not entirely reflect actual parasite distribution. For humans, only five out of sixteen countries reported epidemiological data on neurocysticercosis. Most data referred to neurocysticercosis prevalence among epileptic patients or isolated clinical cases. Furthermore, existing data are often old. Overall, T. solium cysticercosis remains largely neglected in West Africa, and its prevalence appears not to be affected by any religion in particular. There is an urgent need to promote and implement health partnerships and programs on this disease in order to collect more data and identify sensitive populations in the countries of the ECOWAS area.

Proposal for revised classification of epilepsies and epileptic syndromes. Commission on Classification and Terminology of the International League Against Epilepsy.

Marcio Garcia,  ,  E Gonzalez … (2003)
The larval stage of the pork tapeworm (Taenia solium) infects the human nervous system, causing neurocysticercosis. This disease is one of the main causes of epileptic seizures in many less developed countries and is also increasingly seen in more developed countries because of immigration from endemic areas. Little information is available on the natural evolution of taeniasis or cysticercosis. Available therapeutic measures include steroids, treatments for symptoms, surgery, and, more controversially, antiparasitic drugs to kill brain parasites. Efforts to control and eliminate this disease are underway through antiparasitic treatment of endemic populations, development of pig vaccines, and other measures.

André Zoli,  Oliver Shey-Njila,  Emmanuel Assana … (2003)
In West Africa, Taenia solium cysticercosis in both pigs and man has been reported in Benin, Burkina-Faso, Ghana, Ivory Coast, Senegal and Togo, and although official data are lacking, T. solium is anticipated to be present in most of the pig-raising regions of other West African countries as well. In some regions of Nigeria, the prevalence of porcine cysticercosis and human taeniosis is quite high (20.5 and 8.6%, respectively). Surprisingly, however, no cases of human cysticercosis have been reported, although epilepsy is very common. Large epidemiological surveys have only been carried out in Togo and Benin, where the prevalence of human cysticercosis was 2.4 and 1.3%, respectively. In Central Africa, porcine and human cysticercosis are (hyper)-endemic in Rwanda, Burundi, the Democratic Republic of Congo and Cameroon. The parasite also has been reported in pigs in Chad and Angola. Cysticercosis has been shown to be one of the major causes of epilepsy in Cameroon with figures as high as 44.6%. Cameroon is one of the few countries where the taeniosis-cysticercosis complex has been examined more in detail. In the Western province of Cameroon large scale surveys have shown that active cysticercosis is present in 0.4-3% of the local population and in 11% of the village pigs. However, the prevalence of adult T. solium was only 0.1%, which underscores the frequency of the T. solium paradox. Based on the available information, a very conservative economic estimate indicates that the annual losses due to porcine cysticercosis in 10 West and Central African countries amount to about 25 million Euro. The financial losses due to human cysticercosis are very difficult to estimate, but are certainly exceeded by the social impact of the disease, especially because of the particular perception of epilepsy in many African communities. It is concluded that the true prevalence of T. solium cysticercosis in pigs and humans in Central and West Africa remains underestimated because of unreliable slaughterhouse data and the lack of awareness and diagnostic facilities in the public health sector.