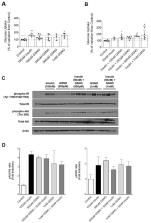 The liver is a fundamental organ to ensure whole-body homeostasis, allowing for a proper increase in insulin sensitivity from the fast to the postprandial status. Hepatic regulation of glucose metabolism is crucial and has been shown to be modulated by glutathione (GSH) and nitric oxide (NO). However, knowledge of the metabolic action of GSH and NO in glucose homeostasis remains incomplete. The current study was designed to test the hypothesis that treatment with S-nitrosoglutathione is sufficient to revert insulin resistance induced by a high-sucrose diet. Male Wistar rats were divided in a control or high-sucrose group. Insulin sensitivity was determined: (i) in the fast state; (ii) after a standardized test meal; (iii) after GSH + NO; and after (iv) S-nitrosoglutathione (GSNO) administration. The fasting glucose level was not different between the control and high-sucrose group. In the liver, the high-sucrose model shows increased NO and unchanged GSH levels. In control animals, insulin sensitivity increased after a meal or administration of GSH+NO/GSNO, but this was abrogated by sucrose feeding. GSNO was able to revert insulin resistance induced by sucrose feeding, in a dose-dependent manner, suggesting that they have an insulin-sensitizing effect in vivo. These effects are associated with an increased insulin receptor and Akt phosphorylation in muscle cells. Our findings demonstrate that GSNO promotes insulin sensitivity in a sucrose-induced insulin-resistant animal model and further implicates that this antioxidant molecule may act as a potential pharmacological tool for the treatment of insulin resistance in obesity and type 2 diabetes.

Nitrite and nitrate determinations in plasma: a critical evaluation.