The regeneration capacity of the flatworm Macrostomum lignano—on repeated regeneration, rejuvenation, and the minimal size needed for regeneration 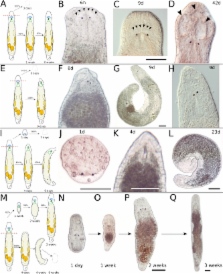 The lion’s share of studies on regeneration in Plathelminthes (flatworms) has been so far carried out on a derived taxon of rhabditophorans, the freshwater planarians (Tricladida), and has shown this group’s outstanding regeneration capabilities in detail. Sharing a likely totipotent stem cell system, many other flatworm taxa are capable of regeneration as well. In this paper, we present the regeneration capacity of Macrostomum lignano, a representative of the Macrostomorpha, the basal-most taxon of rhabditophoran flatworms and one of the most basal extant bilaterian protostomes. Amputated or incised transversally, obliquely, and longitudinally at various cutting levels, M. lignano is able to regenerate the anterior-most body part (the rostrum) and any part posterior of the pharynx, but cannot regenerate a head. Repeated regeneration was observed for 29 successive amputations over a period of almost 12 months. Besides adults, also first-day hatchlings and older juveniles were shown to regenerate after transversal cutting. The minimum number of cells required for regeneration in adults (with a total of 25,000 cells) is 4,000, including 160 neoblasts. In hatchlings only 1,500 cells, including 50 neoblasts, are needed for regeneration. The life span of untreated M. lignano was determined to be about 10 months.

Peter W. Reddien,  Alejandro Alvarado-Lassman (2003)
The principles underlying regeneration in planarians have been explored for over 100 years through surgical manipulations and cellular observations. Planarian regeneration involves the generation of new tissue at the wound site via cell proliferation (blastema formation), and the remodeling of pre-existing tissues to restore symmetry and proportion (morphallaxis). Because blastemas do not replace all tissues following most types of injuries, both blastema formation and morphallaxis are needed for complete regeneration. Here we discuss a proliferative cell population, the neoblasts, that is central to the regenerative capacities of planarians. Neoblasts may be a totipotent stem-cell population capable of generating essentially every cell type in the adult animal, including themselves. The population properties of the neoblasts and their descendants still await careful elucidation. We identify the types of structures produced by blastemas on a variety of wound surfaces, the principles guiding the reorganization of pre-existing tissues, and the manner in which scale and cell number proportions between body regions are restored during regeneration.

Not your father's planarian: a classic model enters the era of functional genomics.

Alejandro Alvarado-Lassman,  Lisa Newmark (2002)
Freshwater planarians were a classic model for studying the problems of development and regeneration. However, as attention shifted towards animals with more rigid developmental processes, the planarians, with their notoriously plastic ontogeny, declined in significance as a model system. This trend was exacerbated with the introduction of genetic and molecular approaches, which did not work well in planarians. More recently, the heightened interest in stem-cell biology, along with the successful application of molecular, cellular and genomic approaches in planarians, is re-establishing these fascinating organisms as models for studying regeneration and developmental plasticity.

Phillip A. Newmark,  Alejandro Sánchez Alvarado (2000)
The singular regenerative abilities of planarians require a population of stem cells known as neoblasts. In response to wounding, or during the course of cell turnover, neoblasts are signaled to divide and/or differentiate, thereby replacing lost cell types. The study of these pluripotent stem cells and their role in planarian regeneration has been severely hampered by the reported inability of planarians to incorporate exogenous DNA precursors; thus, very little is known about the mechanisms that control proliferation and differentiation of this stem cell population within the planarian. Here we show that planarians are, in fact, capable of incorporating the thymidine analogue bromodeoxyuridine (BrdU), allowing neoblasts to be labeled specifically during the S phase of the cell cycle. We have used BrdU labeling to study the distribution of neoblasts in the intact animal, as well as to directly demonstrate the migration and differentiation of neoblasts. We have examined the proposal that a subset of neoblasts is arrested in the G2 phase of the cell cycle by double-labeling with BrdU and a mitosis-specific marker; we find that the median length of G2 (approximately 6 h) is sufficient to account for the initial mitotic burst observed after feeding or amputation. Continuous BrdU-labeling experiments also suggest that there is not a large, slow-cycling population of neoblasts in the intact animal. The ability to label specifically the regenerative stem cells, combined with the recently described use of double-stranded RNA to inhibit gene expression in the planarian, should serve to reignite interest in the flatworm as an experimental model for studying the problems of metazoan regeneration and the control of stem cell proliferation. Copyright 2000 Academic Press.