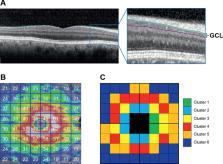 The purpose of this study was to examine changes in the ganglion cell layer (GCL) of individuals with intermediate age-related macular degeneration (AMD) using grid-wise analysis for macular optical coherence tomography (OCT) volume scans. We also aim to validate the use of age-correction functions for GCL thickness in diseased eyes.

OCT macular cube scans covering 30° × 25° were acquired using Spectralis spectral-domain OCT for 87 eyes with intermediate AMD, 77 age-matched normal eyes, and 254 non-age-matched normal eyes. The thickness of the ganglion cell layer (GCL) was defined after segmentation at 60 locations across an 8 × 8 grid centered on the fovea, where each grid location covered 0.74 mm 2 (approximately 3° × 3°) within the macula. Each GCL location of normal eyes ( n = 77) were assigned to a specific iso-ganglion cell density cluster in the macula, based on patterns of age-related GCL thickness loss. Analyses were then performed comparing AMD GCL grid-wise data against corresponding spatial clusters, and significant AMD GCL thickness changes were denoted as values outside the 95% distribution limits.

GCL thickness changed significantly and nonuniformly within the macula of intermediate AMD eyes. Further characterization of these changes is critical to improve diagnoses and monitoring of GCL-altering pathologies.

N Medeiros,  David C Millican,  B. Curcio (1996)
The authors showed previously that parafoveal rods, but not cones, decrease during the course of adulthood in donor eyes that were screened to exclude the grossly visible macular drusen and pigmentary disturbances typical of age-related macular degeneration (AMD). Because AMD begins in the parafovea, this selective loss of rods actually may be subclinical AMD not yet visible in the fundus. If so, AMD must have a predilection for rods over cones. The authors tested this hypothesis by determining the relative numbers of cones and rods in donor eyes with mid-to late-stage AMD and in age-matched controls. Thirteen eyes (from seven donors) with grossly visible macular drusen and pigmentary disturbances were either wholemounted for photoreceptor counts or sectioned through the fovea for histopathology and carbonic anhydrase histochemistry to label red-green cones. Eyes were assigned to AMD or control groups on the basis of histopathology and clinical history. Five nonexudative AMD (NE-AMD) eyes from three donors showed sparing of foveal cones and loss of rods and cones in the parafovea. In two donors, rod loss exceeded cone loss at most parafoveal locations, and in one donor, rod density was normal and cone density was reduced. In eight exudative AMD (EX-AMD) eyes from five donors, photoreceptors surviving along the margins of and overlying disciform scars were largely cones. Photoreceptors are lost in NE-AMD as well as in the more severe exudative form, consistent with functional and clinical studies. The authors propose that rods die in older eyes without evidence of overt retinal pigment epithelial disease. In persons susceptible to AMD, the retinal pigment epithelium becomes dysfunctional. Secondarily, rod loss continues and cones begin to degenerate. Eventually, only degenerate cones remain; ultimately, all photoreceptors may disappear.

C Owsley,  Ya Huang,  Lindsey A Ho … (1999)
To determine whether there is rod system dysfunction in the central retina of patients with age-related macular degeneration (AMD). Dark-adapted sensitivity (500-nm stimulus) and light-adapted sensitivity (600 nm) were measured psychophysically at 52 loci in the central 38 degrees (diameter) of retina in 80 patients with AMD, and results were compared with those from older adult normal controls. All dark-adapted data were corrected for preretinal absorption. Mean field dark-adapted sensitivity was significantly lower in AMD patients as a group than in normal subjects. Within the AMD group were subsets of patients with normal mean dark- and light-adapted sensitivities; reduced dark-adapted sensitivities without detectable light-adapted losses; both types of losses; and, least commonly, only light-adapted losses. Regional retinal analyses of the dark-adapted deficit indicated the greatest severity was 2 degrees to 4 degrees or approximately 1 mm from the fovea, and the deficit decreased with increasing eccentricity. These psychophysical results are consistent with histopathologic findings of a selective vulnerability for parafoveal rod photoreceptors in AMD. The different patterns of rod and cone system losses among patients at similar clinical stages reinforces the notion that AMD is a group of disorders with underlying heterogeneity of mechanism of visual loss. Dark-adapted macula-wide testing may be a useful complement to the more traditional outcome measures of fundus pathology and foveal cone-based psychophysics in future AMD trials.

Ferdinand Schlanitz,  Bernhard Baumann,  Michael Kundi … (2016)
Aims To quantify the change in drusen volume over time and identify its prognostic value for individual risk assessment. Methods A prospective observational study over a minimum of 3 years and maximum of 5 years and follow-up examination every 3 months was conducted at the ophthalmology department of the Medical University of Vienna. 109 patients presenting early and intermediate age-related macular degeneration (AMD) were included, of which 30 patients concluded a regular follow-up for at least 3 years. 50 eyes of 30 patients were imaged every 3 months using spectral-domain and polarisation-sensitive optical coherence tomography (OCT). Drusen volume was measured using an automated algorithm. Data of a 6-month follow-up were segmented manually by expert graders. Results Gradings from 24 000 individual B-scans showed solid correlation between manual and automated segmentation with an initial mean drusen volume of 0.17 mm3. The increase in drusen volume was shown to be comparable among all eyes, and a model for long-term drusen volume development could be fitted as a cubic polynomial function and an R2=0.955. Spontaneous drusen regression was observed in 22 of 50 eyes. In this group, four eyes developed choroidal neovascularisation and three geographic atrophy. Conclusions Drusen volume increase over time can be described by a cubic function. Spontaneous regression appears to precede conversion to advanced AMD. OCT might be a promising tool for predicting the individual risk of progression of AMD.