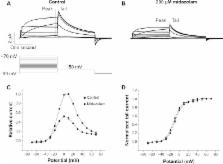 Midazolam is a short-acting benzodiazepine that is in wide clinical use as an anxiolytic, sedative, hypnotic, and anticonvulsant. Midazolam has been shown to inhibit ion channels, including calcium and potassium channels. So far, the effects of midazolam on cardiac human ether-à-go-go-related gene (hERG) channels have not been analyzed. The inhibitory effects of midazolam on heterologously expressed hERG channels were analyzed in Xenopus oocytes using the double-electrode voltage clamp technique. We found that midazolam inhibits hERG channels in a concentration-dependent manner, yielding an IC 50 of 170 μM in Xenopus oocytes. When analyzed in a HEK 293 cell line using the patch-clamp technique, the IC 50 was 13.6 μM. Midazolam resulted in a small negative shift of the activation curve of hERG channels. However, steady-state inactivation was not significantly affected. We further show that inhibition is state-dependent, occurring within the open and inactivated but not in the closed state. There was no frequency dependence of block. Using the hERG pore mutants F656A and Y652A we provide evidence that midazolam uses a classical binding site within the channel pore. Analyzing the subacute effects of midazolam on hERG channel trafficking, we further found that midazolam does not affect channel surface expression. Taken together, we show that the anesthetic midazolam is a low-affinity inhibitor of cardiac hERG channels without additional effects on channel surface expression. These data add to the current understanding of the pharmacological profile of the anesthetic midazolam.

Anya Lin,  Claudio M Sanguinetti,  Janice Chen … (2000)
Mutations in the HERG K(+) channel gene cause inherited long QT syndrome (LQT), a disorder of cardiac repolarization that predisposes affected individuals to lethal arrhythmias [Curran, M. E. , Splawski, I., Timothy, K. W., Vincent, G. M., Green, E. D. & Keating, M. T. (1995) Cell 80, 795-804]. Acquired LQT is far more common and is most often caused by block of cardiac HERG K(+) channels by commonly used medications [Roden, D. M., Lazzara, R., Rosen, M., Schwartz, P. J., Towbin, J. & Vincent, G. M. (1996) Circulation 94, 1996-2012]. It is unclear why so many structurally diverse compounds block HERG channels, but this undesirable side effect now is recognized as a major hurdle in the development of new and safe drugs. Here we use alanine-scanning mutagenesis to determine the structural basis for high-affinity drug block of HERG channels by MK-499, a methanesulfonanilide antiarrhythmic drug. The binding site, corroborated with homology modeling, is comprised of amino acids located on the S6 transmembrane domain (G648, Y652, and F656) and pore helix (T623 and V625) of the HERG channel subunit that face the cavity of the channel. Other compounds that are structurally unrelated to MK-499, but cause LQT, also were studied. The antihistamine terfenadine and a gastrointestinal prokinetic drug, cisapride, interact with Y652 and F656, but not with V625. The aromatic residues of the S6 domain that interact with these drugs (Y652 and F656) are unique to eag/erg K(+) channels. Other voltage-gated K(+) (Kv) channels have Ile and Val (Ile) in the equivalent positions. These findings suggest a possible structural explanation for how so many commonly used medications block HERG but not other Kv channels and should facilitate the rational design of drugs devoid of HERG channel binding activity.

S. Viskin (1999)
In the long QT syndromes (LQTS), malfunction of ion channels impairs ventricular repolarisation and triggers a characteristic ventricular tachyarrhythmia: torsade de pointes. Symptoms in the LQTS (syncope or cardiac arrest) are caused by this arrhythmia. In congenital LQTS, mutations in the genes encoding for ion channels cause this channel malfunction. Six genotypes (LQT1 to LQT6) have been identified, and attempts are being made to correlate different mutations with clinical signs and specific therapy. In acquired LQTS, channel malfunction is caused by metabolic abnormalities or drugs. The list of drugs that may impair ion-channel function expands continuously. Moreover, attributes that increase the risk for drug-induced torsade (eg, female sex, recent heart-rate slowing, or hypokalaemia) and electrocardiographic "warning signs" are recognised. Recent data suggest that patients with an acquired LQTS have some underlying predisposition to proarrhythmia. Mutations causing "silent" forms of congenital LQTS, in which the patient remains free of arrhythmias until exposed to drugs that further impair repolarisation, are now recognised.

David J. Greenblatt,  J G Reves,  H Vinik … (1985)
Midazolam is an imidazobenzodiazepine with unique properties when compared with other benzodiazepines. It is water soluble in its acid formulation but is highly lipid soluble in vivo. Midazolam also has a relatively rapid onset of action and high metabolic clearance when compared with other benzodiazepines. The drug produces reliable hypnosis, amnesia, and antianxiety effects when administered orally, intramuscularly, or intravenously. There are many uses for midazolam in the perioperative period including premedication, anesthesia induction and maintenance, and sedation for diagnostic and therapeutic procedures. Midazolam is preferable to diazepam in many clinical situations because of its rapid, nonpainful induction and lack of venous irritation. Compared with thiopental, midazolam is not as rapid acting nor predictable in hypnotic effect. It will not replace thiopental as an induction agent. Advantages of midazolam over thiopental are those of the more versatile pharmacologic properties of a benzodiazepine compared with a barbiturate such as amnestic and anxiolytic properties. Midazolam should be a useful addition to the formulary.