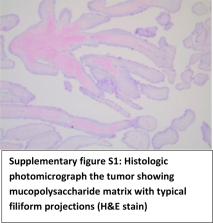 Frequency of primary tumors of the heart.

Klaus Reynen (1996)
Primary tumors of the heart are rare. Based upon the data of 22 large autopsy series, the frequency of primary cardiac tumors is approximately 0.02%--corresponding to 200 tumors in 1 million autopsies (Table I).

Ramesh Gowda,  Ijaz Khan,  Chandra Nair … (2003)
With the advent of echocardiography, cardiac papillary fibroelastoma (CPF) is being increasingly reported. The demographics, clinical characteristics, pathological features, treatment, and prognosis of CPF are examined. Cases, case series and related articles on the subject in all languages were identified through a comprehensive literature search. Seven hundred twenty-five cases of CPF were identified. Males comprised 55% of patients. Highest prevalence was in the 8th decade of life. The valvular surface was the predominant locations of tumor. The most commonly involved valve was the aortic valve, followed by the mitral valve. The left ventricle was the predominant nonvalvular site involved. No clear risk factor for development of CPF has been reported. Size of the tumor varied from 2 mm to 70 mm. Clinically, CPFs have presented with transient ischemic attack, stroke, myocardial infarction, sudden death, heart failure, presyncope, syncope, pulmonary embolism, blindness, and peripheral embolism. Tumor mobility was the only independent predictor of CPF-related death or nonfatal embolization. Symptomatic patients should be treated surgically because the successful complete resection of CPF is curative and the long-term postoperative prognosis is excellent. The symptomatic patients who are not surgical candidates could be offered long-term oral anticoagulation, although no randomized controlled data are available on its efficacy. Asymptomatic patients could be treated surgically if the tumor is mobile, as the tumor mobility is the independent predictor of death or nonfatal embolization. Asymptomatic patients with nonmobile CPF could be followed-up closely with periodic clinical evaluation and echocardiography, and receive surgical intervention when symptoms develop or the tumor becomes mobile.

Kyle Klarich,  Maurice Enriquez-Sarano,  George M. Gura … (1997)
We sought to determine the clinical and echocardiographic characteristics of papillary fibroelastoma (PFE). PFE is a rarely encountered cardiac tumor about which relatively little is known. Institutional records were reviewed for the years 1980 to 1995 for patients with pathologic or echocardiographic diagnosis of PFE. Group 1 included 17 patients with the pathologic diagnosis of PFE who also underwent echocardiography. Echocardiographic features of PFE were established in group 1. Group 2 included 37 patients with only echocardiographic evidence of PFE. In group 1, 7 (41.2%) of 17 patients had symptoms related to PFE. Neurologic events occurred in 5 (29.4%) of 17 patients. All patients had the tumor surgically removed. During follow-up, no new embolic events occurred. Echocardiographic characteristics of PFE included a small tumor (12.1 +/- 6.5 x 9.0 +/- 4.3 mm), usually pedunculated (14 [94%] of 17 patients) and mobile, with a homogeneous speckled pattern and a characteristic stippling along the edges. PFEs were most common on valvular surfaces (12 [60%] of 20 PFEs) but were not uncommon on other endocardial surfaces (8 [40%] of 20 PFEs). The tumor did not cause valvular dysfunction. In group 2, 16 (43%) of 37 patients were asymptomatic. Five patients (13.5%) had a previous neurologic event. During follow-up (mean 31 months, range 1 to 77), nine neurologic events occurred. PFEs are associated with embolism, can be diagnosed with echocardiography, are often an incidental clinical finding and do not cause valvular dysfunction.