New species and records of Diaporthe from Jiangxi Province, China 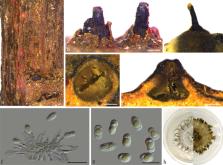 New algorithms and methods to estimate maximum-likelihood phylogenies: assessing the performance of PhyML 3.0.

Stéphane Guindon,  Jean-François Dufayard,  Vincent Lefort … (2010)
PhyML is a phylogeny software based on the maximum-likelihood principle. Early PhyML versions used a fast algorithm performing nearest neighbor interchanges to improve a reasonable starting tree topology. Since the original publication (Guindon S., Gascuel O. 2003. A simple, fast and accurate algorithm to estimate large phylogenies by maximum likelihood. Syst. Biol. 52:696-704), PhyML has been widely used (>2500 citations in ISI Web of Science) because of its simplicity and a fair compromise between accuracy and speed. In the meantime, research around PhyML has continued, and this article describes the new algorithms and methods implemented in the program. First, we introduce a new algorithm to search the tree space with user-defined intensity using subtree pruning and regrafting topological moves. The parsimony criterion is used here to filter out the least promising topology modifications with respect to the likelihood function. The analysis of a large collection of real nucleotide and amino acid data sets of various sizes demonstrates the good performance of this method. Second, we describe a new test to assess the support of the data for internal branches of a phylogeny. This approach extends the recently proposed approximate likelihood-ratio test and relies on a nonparametric, Shimodaira-Hasegawa-like procedure. A detailed analysis of real alignments sheds light on the links between this new approach and the more classical nonparametric bootstrap method. Overall, our tests show that the last version (3.0) of PhyML is fast, accurate, stable, and ready to use. A Web server and binary files are available from http://www.atgc-montpellier.fr/phyml/.