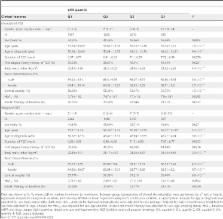 Recent genome-wide association studies (GWAS) identified more than 70 novel loci for type 2 diabetes (T2D), some of which have been widely replicated in Asian populations. In this study, we investigated their individual and combined effects on T2D in a Chinese population.

We selected 14 single nucleotide polymorphisms (SNPs) in T2D genes relating to beta-cell function validated in Asian populations and genotyped them in 5882 Chinese T2D patients and 2569 healthy controls. A combined genetic score (CGS) was calculated by summing up the number of risk alleles or weighted by the effect size for each SNP under an additive genetic model. We tested for associations by either logistic or linear regression analysis for T2D and quantitative traits, respectively. The contribution of the CGS for predicting T2D risk was evaluated by receiver operating characteristic (ROC) analysis and net reclassification improvement (NRI).

We observed consistent and significant associations of IGF2BP2, WFS1, CDKAL1, SLC30A8, CDKN2A/B, HHEX, TCF7L2 and KCNQ1 (8.5×10 −18< P<8.5×10 −3), as well as nominal associations of NOTCH2, JAZF1, KCNJ11 and HNF1B (0.05< P<0.1) with T2D risk, which yielded odds ratios ranging from 1.07 to 2.09. The 8 significant SNPs exhibited joint effect on increasing T2D risk, fasting plasma glucose and use of insulin therapy as well as reducing HOMA-β, BMI, waist circumference and younger age of diagnosis of T2D. The addition of CGS marginally increased AUC (2%) but significantly improved the predictive ability on T2D risk by 11.2% and 11.3% for unweighted and weighted CGS, respectively using the NRI approach ( P<0.001).

In a Chinese population, the use of a CGS of 8 SNPs modestly but significantly improved its discriminative ability to predict T2D above and beyond that attributed to clinical risk factors (sex, age and BMI).

Global estimates of the prevalence of diabetes for 2010 and 2030.

Richard Sicree,  P Zimmet,  Daniel Shaw (2009)
We estimated the number of people worldwide with diabetes for the years 2010 and 2030. Studies from 91 countries were used to calculate age- and sex-specific diabetes prevalences, which were applied to national population estimates, to determine national diabetes prevalences for all 216 countries for 2010 and 2030. Studies were identified using Medline, and contact with all national and regional International Diabetes Federation offices. Studies were included if diabetes prevalence was assessed using a population-based methodology, and was based on World Health Organization or American Diabetes Association diagnostic criteria for at least three separate age-groups within the 20-79 year range. Self-report or registry data were used if blood glucose assessment was not available. The world prevalence of diabetes among adults (aged 20-79 years) will be 6.4%, affecting 285 million adults, in 2010, and will increase to 7.7%, and 439 million adults by 2030. Between 2010 and 2030, there will be a 69% increase in numbers of adults with diabetes in developing countries and a 20% increase in developed countries. These predictions, based on a larger number of studies than previous estimates, indicate a growing burden of diabetes, particularly in developing countries. Copyright 2009 Elsevier Ireland Ltd. All rights reserved.