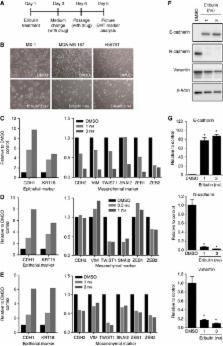 Eribulin mesilate (eribulin), a non-taxane microtubule dynamics inhibitor, has shown trends towards greater overall survival (OS) compared with progression-free survival in late-stage metastatic breast cancer patients in the clinic. This finding suggests that eribulin may have additional, previously unrecognised antitumour mechanisms beyond its established antimitotic activity. To investigate this possibility, eribulin's effects on the balance between epithelial–mesenchymal transition (EMT) and mesenchymal–epithelial transition (MET) in human breast cancer cells were investigated.

Triple negative breast cancer (TNBC) cells, which are oestrogen receptor (ER−)/progesterone receptor (PR−)/human epithelial growth receptor 2 (HER2−) and have a mesenchymal phenotype, were treated with eribulin for 7 days, followed by measurement of EMT-related gene and protein expression changes in the surviving cells by quantitative real-time PCR (qPCR) and immunoblot, respectively. In addition, proliferation, migration, and invasion assays were also conducted in eribulin-treated cells. To investigate the effects of eribulin on TGF- β/Smad signalling, the phosphorylation status of Smad proteins was analysed. In vivo, the EMT/MET status of TNBC xenografts in mice treated with eribulin was examined by qPCR, immunoblot, and immunohistochemical analysis. Finally, an experimental lung metastasis model was utilised to gauge the metastatic activity of eribulin-treated TNBC in the in vivo setting.

Treatment of TNBC cells with eribulin in vitro led to morphological changes consistent with transition from a mesenchymal to an epithelial phenotype. Expression analyses of EMT markers showed that eribulin treatment led to decreased expression of several mesenchymal marker genes, together with increased expression of several epithelial markers. In the TGF- β induced EMT model, eribulin treatment reversed EMT, coincident with inhibition of Smad2 and Smad3 phosphorylation. Consistent with these changes, TNBC cells treated with eribulin for 7 days showed decreased capacity for in vitro migration and invasiveness. In in vivo xenograft models, eribulin treatment reversed EMT and induced MET as assessed by qPCR, immunoblot, and immunohistochemical analyses of epithelial and mesenchymal marker proteins. Finally, surviving TNBC cells pretreated in vitro with eribulin for 7 days led to decreased numbers of lung metastasis when assessed in an in vivo experimental metastasis model.

Eribulin exerted significant effects on EMT/MET-related pathway components in human breast cancer cells in vitro and in vivo, consistent with a phenotypic switch from mesenchymal to epithelial states, and corresponding to observed decreases in migration and invasiveness in vitro as well as experimental metastasis in vivo. These preclinical findings may provide a plausible scientific basis for clinical observations of prolonged OS by suppression of further spread of metastasis in breast cancer patients treated with eribulin.

Fabio Puglisi,  C Osborne,  Carlos Arteaga … (2011)
The advent of HER2-directed therapies has significantly improved the outlook for patients with HER2-positive early stage breast cancer. However, a significant proportion of these patients still relapse and die of breast cancer. Trials to define, refine and optimize the use of the two approved HER2-targeted agents (trastuzumab and lapatinib) in patients with HER2-positive early stage breast cancer are ongoing. In addition, promising new approaches are being developed including monoclonal antibodies and small-molecule tyrosine kinase inhibitors targeting HER2 or other HER family members, antibodies linked to cytotoxic moieties or modified to improve their immunological function, immunostimulatory peptides, and targeting the PI3K and IGF-1R pathways. Improved understanding of the HER2 signaling pathway, its relationship with other signaling pathways and mechanisms of resistance has also led to the development of rational combination therapies and to a greater insight into treatment response in patients with HER2-positive breast cancer. Based on promising results with new agents in HER2-positive advanced-stage disease, a series of large trials in the adjuvant and neoadjuvant settings are planned or ongoing. This Review focuses on current treatment for patients with HER2-positive breast cancer and aims to update practicing clinicians on likely future developments in the treatment for this disease according to ongoing clinical trials and translational research.

Mesenchymal-epithelial transition (MET) as a mechanism for metastatic colonisation in breast cancer.

Erik Thompson,  N Gunasinghe,  Alan Wells … (2012)
As yet, there is no cure for metastatic breast cancer. Historically, considerable research effort has been concentrated on understanding the processes of metastasis, how a primary tumour locally invades and systemically disseminates using the phenotypic switching mechanism of epithelial to mesenchymal transition (EMT); however, much less is understood about how metastases are then formed. Breast cancer metastases often look (and may even function) as 'normal' breast tissue, a bizarre observation against the backdrop of the organ structure of the lung, liver, bone or brain. Mesenchymal to epithelial transition (MET), the opposite of EMT, has been proposed as a mechanism for establishment of the metastatic neoplasm, leading to questions such as: Can MET be clearly demonstrated in vivo? What factors cause this phenotypic switch within the cancer cell? Are these signals/factors derived from the metastatic site (soil) or expressed by the cancer cells themselves (seed)? How do the cancer cells then grow into a detectable secondary tumour and further disseminate? And finally--Can we design and develop therapies that may combat this dissemination switch? This review aims to address these important questions by evaluating long-standing paradigms and novel emerging concepts in the field of epithelial mesencyhmal plasticity.

The primary antimitotic mechanism of action of the synthetic halichondrin E7389 is suppression of microtubule growth.

Jennifer Davis,  Prakash K. Kamath,  Tatiana Okouneva … (2005)
E7389, which is in phase I and II clinical trials, is a synthetic macrocyclic ketone analogue of the marine sponge natural product halichondrin B. Whereas its mechanism of action has not been fully elucidated, its main target seems to be tubulin and/or the microtubules responsible for the construction and proper function of the mitotic spindle. Like most microtubule-targeted antitumor drugs, it inhibits tumor cell proliferation in association with G(2)-M arrest. It binds to tubulin and inhibits microtubule polymerization. We examined the mechanism of action of E7389 with purified microtubules and in living cells and found that, unlike antimitotic drugs including vinblastine and paclitaxel that suppress both the shortening and growth phases of microtubule dynamic instability, E7389 seems to work by an end-poisoning mechanism that results predominantly in inhibition of microtubule growth, but not shortening, in association with sequestration of tubulin into aggregates. In living MCF7 cells at the concentration that half-maximally blocked cell proliferation and mitosis (1 nmol/L), E7389 did not affect the shortening events of microtubule dynamic instability nor the catastrophe or rescue frequencies, but it significantly suppressed the rate and extent of microtubule growth. Vinblastine, but not E7389, inhibited the dilution-induced microtubule disassembly rate. The results suggest that, at its lowest effective concentrations, E7389 may suppress mitosis by directly binding to microtubule ends as unliganded E7389 or by competition of E7389-induced tubulin aggregates with unliganded soluble tubulin for addition to growing microtubule ends. The result is formation of abnormal mitotic spindles that cannot pass the metaphase/anaphase checkpoint.