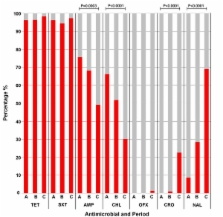 Shigellosis remains considerable public health problem in some developing countries. The nature of Shigellae suggests that they are highly adaptable when placed under selective pressure in a human population. This is demonstrated by variation and fluctuations in serotypes and antimicrobial resistance profile of organisms circulating in differing setting in endemic locations. Antimicrobial resistance in the genus Shigella is a constant threat, with reports of organisms in Asia being resistant to multiple antimicrobials and new generation therapies.

Our data demonstrates a shift in dominant infecting species ( S. flexneri to S. sonnei) and resistance profile of the organisms circulating in southern Vietnam. We find that there was no significant variation in the syndromes associated with either S. sonnei or S. flexneri, yet the clinical features of the disease are more severe in later observations.

Our findings show a change in clinical presentation of shigellosis in this setting, as the disease may be now more pronounced, this is concurrent with a change in antimicrobial resistance profile. These data highlight the socio-economic development of southern Vietnam and should guide future vaccine development and deployment strategies.

Steven LeVine,  B. Ivanoff,  J. Clemens … (1998)
Few studies provide data on the global morbidity and mortality caused by infection with Shigella spp.; such estimates are needed, however, to plan strategies of prevention and treatment. Here we report the results of a review of the literature published between 1966 and 1997 on Shigella infection. The data obtained permit calculation of the number of cases of Shigella infection and the associated mortality occurring worldwide each year, by age, and (as a proxy for disease severity) by clinical category, i.e. mild cases remaining at home, moderate cases requiring outpatient care, and severe cases demanding hospitalization. A sensitivity analysis was performed to estimate the high and low range of morbid and fatal cases in each category. Finally, the frequency distribution of Shigella infection, by serogroup and serotype and by region of the world, was determined. The annual number of Shigella episodes throughout the world was estimated to be 164.7 million, of which 163.2 million were in developing countries (with 1.1 million deaths) and 1.5 million in industrialized countries. A total of 69% of all episodes and 61% of all deaths attributable to shigellosis involved children under 5 years of age. The median percentages of isolates of S. flexneri, S. sonnei, S. boydii, and S. dysenteriae were, respectively, 60%, 15%, 6%, and 6% (30% of S. dysenteriae cases were type 1) in developing countries; and 16%, 77%, 2%, and 1% in industrialized countries. In developing countries, the predominant serotype of S. flexneri is 2a, followed by 1b, 3a, 4a, and 6. In industrialized countries, most isolates are S. flexneri 2a or other unspecified type 2 strains. Shigellosis, which continues to have an important global impact, cannot be adequately controlled with the existing prevention and treatment measures. Innovative strategies, including development of vaccines against the most common serotypes, could provide substantial benefits.

Epidemiologic patterns of acute diarrhea and endemic Shigella infections in children in a poor periurban setting in Santiago, Chile.

P Abrego,  L Guers,  M Cayyazo … (1991)
To prepare a field site for evaluating preventive interventions against endemic shigellosis, the authors followed prospectively a cohort of 360 children (90 each of children aged 0-11, 12-23, 24-35, and 36-47 months) in Santa Julia, a low socioeconomic area in Santiago, Chile, from November 1986 through April 1989 with twice weekly household visits for diarrheal disease; infants replaced children who reached 60 months of age. Coprocultures on 2 consecutive days from children with diarrhea and from age-matched controls within the cohort were cultured for Shigella. Bacteriologic surveillance was also maintained in the health center and children's hospital serving Santa Julia. In this community, where all households had access to potable water (68% inside) and all but 3% had access to a toilet, but where there was marked crowding, the overall incidence of diarrheal disease in the cohort was low (2.26 episodes/12 child months of observation in children aged 0-11 months and 2.09 in those aged 12-23 months), yet Shigella infections were common. Shigella accounted for 10% of diarrheal episodes in the cohort (vs. 3.2% isolation rate in controls, p less than 0.0001). The incidence of shigellosis in children aged 12-47 months was 0.16 cases per 12 child months of observation; in the first 5 years of life, a child had a 67% chance of experiencing shigellosis. Shigella sonnei, Shigella flexneri 2a, and S. flexneri 6 caused greater than 79% of the infections. Shigella occurred more often in hospitalized cases of diarrhea than in age-matched cases detected in the health center or by household surveillance (p less than 0.0001). An initial episode of Shigella diarrhea did not diminish overall the risk of subsequent shigellosis but did confer 72% protection (p = 0.05) against illness due to the homologous serotype. The high rate of both S. sonnei and S. flexneri shigellosis in a population with a low background rate of diarrhea makes Santa Julia an appropriate site for assessing the efficacy and effectiveness of measures to reduce Shigella infections.