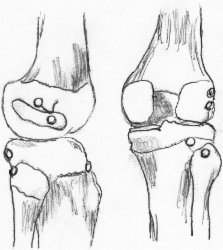 The aim of this study was to evaluate the treatment of patients with chronic lesions in the posterolateral corner of the knee with reconstruction of the fibular collateral ligament, popliteus tendon and popliteofibular ligament and with autografts of the biceps femoris and fascia lata.

A total of 129 patients with injuries of the posterolateral corner of the knee that lasted for more than three weeks and were associated with the lesion of at least one of the cruciate ligaments were included. All of the patients were operated on consecutively in the same hospital between March 2004 and April 2009. Clinical evaluation using the Lyshom scale and the International Knee Documentation Committee (IKDC, item 4, assessment ligament) protocol was performed in 114 patients for whom there were complete data available.

There was significant improvement in the Lyshom score and improved stability according to the IKDC protocol in the pre- compared to postoperative varus stress test at 30 degrees and the posterolateral rotation test.

An analysis of an anatomical posterolateral knee reconstruction: an in vitro biomechanical study and development of a surgical technique.

The posterolateral attachments of the knee: a qualitative and quantitative morphologic analysis of the fibular collateral ligament, popliteus tendon, popliteofibular ligament, and lateral gastrocnemius tendon.

Robert F. LaPrade,  Thuan V Ly,  Fred A. Wentorf … (2015)
Quantitative descriptions of the attachment sites of the main posterolateral knee structures have not been performed. To qualitatively and quantitatively determine the anatomic attachment sites of these structures and their relationships to pertinent bony landmarks. Cadaveric study. Dissections were performed and measurements taken on 10 nonpaired fresh-frozen cadaveric knees. The fibular collateral ligament had an average femoral attachment slightly proximal (1.4 mm) and posterior (3.1 mm) to the lateral epicondyle. Distally, it attached 8.2 mm posterior to the anterior aspect of the fibular head. The popliteus tendon had a constant broad-based femoral attachment at the most proximal and anterior fifth of the popliteal sulcus. The popliteus tendon attachment on the femur was always anterior to the fibular collateral ligament. The average distance between the femoral attachments of the popliteus tendon and fibular collateral ligament was 18.5 mm. The popliteofibular ligament had two divisions-anterior and posterior-in all cases. The average attachment of the posterior division was 1.6 mm distal to the posteromedial aspect of the tip of the fibular styloid process and the anterior division attached 2.8 mm distal to the anteromedial aspect of the tip of the fibular styloid process. These structures had a consistent attachment pattern. This information will prove useful in the study of anatomic repair and reconstruction of the posterolateral structures of the knee.