Study on the Trend and Disease Burden of Injury Deaths in Chinese Population, 2004–2010 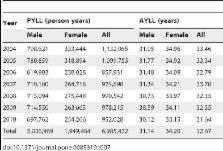 Injuries are a growing public health concern in China, accounting for more than 30% of all Person Years of Life Lost (PYLL) due to premature mortality. This study analyzes the trend and disease burden of injury deaths in Chinese population from 2004 to 2010, using data from the National Disease Surveillance Points (DSPs) system, as injury deaths are classified based on the International Classification of Disease-10 th Revision (ICD-10). We observed that injury death accounted for nearly 10% of all deaths in China throughout the period 2004–2010, and the injury mortality rates were higher in males than those in females, and higher in rural areas than in urban areas. Traffic crashes (33.79–38.47% of all injury deaths) and suicides (16.20–22.01%) were the two leading causes of injury deaths. Alarmingly, suicide surpassed traffic crashes as the leading cause of injury mortality in rural females, yet adults aged 65 and older suffered the greatest number of fatal falls (20,701 deaths, 2004–2010). The burden of injury among men (72.11%) was about three times more than that of women's (28.89%). This study provides indispensible evidence that China Authority needs to improve the surveillance and deterrence of three major types of injuries: Traffic-related injury deaths should be targeted for injury prevention activities in all population, people aged 65+ should be encouraged to take individual fall precautions, and prevention of suicidal behavior in rural females should be another key priority for the government of China.

Keith Hawton,  Kees van Heeringen (2009)
Suicide receives increasing attention worldwide, with many countries developing national strategies for prevention. Rates of suicide vary greatly between countries, with the greatest burdens in developing countries. Many more men than women die by suicide. Although suicide rates in elderly people have fallen in many countries, those in young people have risen. Rates also vary with ethnic origin, employment status, and occupation. Most people who die by suicide have psychiatric disorders, notably mood, substance-related, anxiety, psychotic, and personality disorders, with comorbidity being common. Previous self-harm is a major risk factor. Suicide is also associated with physical characteristics and disorders and smoking. Family history of suicidal behaviour is important, as are upbringing, exposure to suicidal behaviour by others and in the media, and availability of means. Approaches to suicide prevention include those targeting high-risk groups and population strategies. There are, however, many challenges to large-scale prevention, especially in developing countries.

The global burden of injuries.

G Sharma,  R Lozano-Ascencio,  Hollis E Krug (2000)
The traditional view of injuries as "accidents", or random events, has resulted in the historical neglect of this area of public health. However, the most recent estimates show that injuries are among the leading causes of death and disability in the world. They affect all populations, regardless of age, sex, income, or geographic region. In 1998, about 5.8 million people (97.9 per 100,000 population) died of injuries worldwide, and injuries caused 16% of the global burden of disease. Road traffic injuries are the 10th leading cause of death and the 9th leading cause of the burden of disease; self-inflicted injuries, falls, and interpersonal violence follow closely. Injuries affect mostly young people, often causing long-term disability. Decreasing the burden of injuries is among the main challenges for public health in the next century--injuries are preventable, and many effective strategies are available. Public health officials must gain a better understanding of the magnitude and characteristics of the problem, contribute to the development and evaluation of injury prevention programs, and develop the best possible prehospital and hospital care and rehabilitation for injured persons.

David Gunnell,  Michael Eddleston,  Michael R Phillips … (2007)
Background Evidence is accumulating that pesticide self-poisoning is one of the most commonly used methods of suicide worldwide, but the magnitude of the problem and the global distribution of these deaths is unknown. Methods We have systematically reviewed the worldwide literature to estimate the number of pesticide suicides in each of the World Health Organisation's six regions and the global burden of fatal self-poisoning with pesticides. We used the following data sources: Medline, EMBASE and psycINFO (1990–2007), papers cited in publications retrieved, the worldwide web (using Google) and our personal collections of papers and books. Our aim was to identify papers enabling us to estimate the proportion of a country's suicides due to pesticide self-poisoning. Results We conservatively estimate that there are 258,234 (plausible range 233,997 to 325,907) deaths from pesticide self-poisoning worldwide each year, accounting for 30% (range 27% to 37%) of suicides globally. Official data from India probably underestimate the incidence of suicides; applying evidence-based corrections to India's official data, our estimate for world suicides using pesticides increases to 371,594 (range 347,357 to 439,267). The proportion of all suicides using pesticides varies from 4% in the European Region to over 50% in the Western Pacific Region but this proportion is not concordant with the volume of pesticides sold in each region; it is the pattern of pesticide use and the toxicity of the products, not the quantity used, that influences the likelihood they will be used in acts of fatal self-harm. Conclusion Pesticide self-poisoning accounts for about one-third of the world's suicides. Epidemiological and toxicological data suggest that many of these deaths might be prevented if (a) the use of pesticides most toxic to humans was restricted, (b) pesticides could be safely stored in rural communities, and (c) the accessibility and quality of care for poisoning could be improved.

This study was supported by grants from Fundamental Research Funds for the Central Universities (Study on the key technology of disaster warning and relief for rural remote areas); the Nature Science Foundation of China (No. 81001252); Ministry of Education of China (No. 20100072120053), International Science &Technology Cooperation Program of China(No. 2011DFB30010). The funders had no role in study design, data collection and analysis, decision to publish, or preparation of the manuscript.