Systematics of the ant genus Proceratium Roger (Hymenoptera, Formicidae, Proceratiinae) in China – with descriptions of three new species based on micro-CT enhanced next-generation-morphology 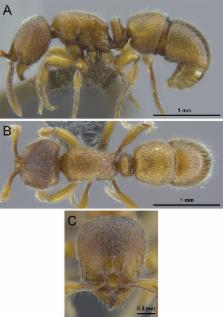 The genus Proceratium Roger, 1863 contains cryptic, subterranean ants that are seldom sampled and rare in natural history collections. Furthermore, most Proceratium specimens are extremely hairy and, due to their enlarged and curved gaster, often mounted suboptimally. As a consequence, the poorly observable physical characteristics of the material and its scarcity result in a rather challenging alpha taxonomy of this group. In this study, the taxonomy of the Chinese Proceratium fauna is reviewed and updated by combining examinations of traditional light microscopy with x-ray microtomography (micro-CT). Based on micro-CT scans of seven out of eight species, virtual 3D surface models were generated that permit in-depth comparative analyses of specimen morphology in order to overcome the difficulties to examine physical material of Proceratium . Eight Chinese species are recognized, of which three are newly described: Proceratium bruelheidei Staab, Xu & Hita Garcia, sp. n. and P. kepingmai sp. n. belong to the P. itoi clade and have been collected in the subtropical forests of southeast China, whereas P. shohei sp. n. belongs to the P. stictum clade and it is only known from a tropical forest of Yunnan Province. Proceratium nujiangense Xu, 2006 syn. n. is proposed as a junior synonym of P. zhaoi Xu, 2000. These taxonomic acts raise the number of known Chinese Proceratium species to eight. In order to integrate the new species into the existing taxonomic system and to facilitate identifications, an illustrated key to the worker caste of all Chinese species is provided, supplemented by species accounts with high-resolution montage images and still images of volume renderings of 3D models based on micro-CT. Moreover, cybertype datasets are provided for the new species, as well as digital datasets for the remaining species that include the raw micro-CT scan data, 3D surface models, 3D rotation videos, and all light photography and micro-CT still images. These datasets are available online (Dryad, Staab et al. 2018, http://dx.doi.org/10.5061/dryad.h6j0g4p).

Phylogeny of the ants: diversification in the age of angiosperms.

Grant Pierce,  Corrie Moreau,  S Archibald … (2006)
We present a large-scale molecular phylogeny of the ants (Hymenoptera: Formicidae), based on 4.5 kilobases of sequence data from six gene regions extracted from 139 of the 288 described extant genera, representing 19 of the 20 subfamilies. All but two subfamilies are recovered as monophyletic. Divergence time estimates calibrated by minimum age constraints from 43 fossils indicate that most of the subfamilies representing extant ants arose much earlier than previously proposed but only began to diversify during the Late Cretaceous to Early Eocene. This period also witnessed the rise of angiosperms and most herbivorous insects.

Evaluating alternative hypotheses for the early evolution and diversification of ants.

Robert Schultz,  Seán Brady,  Michael B. Fisher … (2006)
Ants are the world's most diverse and ecologically dominant eusocial organisms. Resolving the phylogeny and timescale for major ant lineages is vital to understanding how they achieved this success. Morphological, molecular, and paleontological studies, however, have presented conflicting views on early ant evolution. To address these issues, we generated the largest ant molecular phylogenetic data set published to date, containing approximately 6 kb of DNA sequence from 162 species representing all 20 ant subfamilies and 10 aculeate outgroup families. When these data were analyzed with and without outgroups, which are all distantly related to ants and hence long-branched, we obtained conflicting ingroup topologies for some early ant lineages. This result casts strong doubt on the existence of a poneroid clade as currently defined. We compare alternate attachments of the outgroups to the ingroup tree by using likelihood tests, and find that several alternative rootings cannot be rejected by the data. These alternatives imply fundamentally different scenarios for the early evolution of ant morphology and behavior. Our data strongly support several notable relationships within the more derived formicoid ants, including placement of the enigmatic subfamily Aenictogitoninae as sister to Dorylus army ants. We use the molecular data to estimate divergence times, employing a strategy distinct from previous work by incorporating the extensive fossil record of other aculeate Hymenoptera as well as that of ants. Our age estimates for the most recent common ancestor of extant ants range from approximately 115 to 135 million years ago, indicating that a Jurassic origin is highly unlikely.