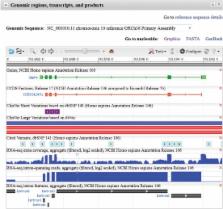 The National Center for Biotechnology Information's (NCBI) Gene database ( www.ncbi.nlm.nih.gov/gene) integrates gene-specific information from multiple data sources. NCBI Reference Sequence (RefSeq) genomes for viruses, prokaryotes and eukaryotes are the primary foundation for Gene records in that they form the critical association between sequence and a tracked gene upon which additional functional and descriptive content is anchored. Additional content is integrated based on the genomic location and RefSeq transcript and protein sequence data. The content of a Gene record represents the integration of curation and automated processing from RefSeq, collaborating model organism databases, consortia such as Gene Ontology, and other databases within NCBI. Records in Gene are assigned unique, tracked integers as identifiers. The content (citations, nomenclature, genomic location, gene products and their attributes, phenotypes, sequences, interactions, variation details, maps, expression, homologs, protein domains and external databases) is available via interactive browsing through NCBI's Entrez system, via NCBI's Entrez programming utilities (E-Utilities and Entrez Direct) and for bulk transfer by FTP.

Joanna Amberger,  Carol A. Bocchini,  Alan F. Scott … (2009)
McKusick's Online Mendelian Inheritance in Man (OMIM®; http://www.ncbi.nlm.nih.gov/omim), a knowledgebase of human genes and phenotypes, was originally published as a book, Mendelian Inheritance in Man, in 1966. The content of OMIM is derived exclusively from the published biomedical literature and is updated daily. It currently contains 18 961 full-text entries describing phenotypes and genes. To date, 2239 genes have mutations causing disease, and 3770 diseases have a molecular basis. Approximately 70 new entries are added and 700 entries are updated per month. OMIM® is expanding content and organization in response to shifting biological paradigms and advancing biotechnology.

Tatiana Tatusova,  Stacy Ciufo,  Boris Fedorov … (2013)
The source of the microbial genomic sequences in the RefSeq collection is the set of primary sequence records submitted to the International Nucleotide Sequence Database public archives. These can be accessed through the Entrez search and retrieval system at http://www.ncbi.nlm.nih.gov/genome. Next-generation sequencing has enabled researchers to perform genomic sequencing at rates that were unimaginable in the past. Microbial genomes can now be sequenced in a matter of hours, which has led to a significant increase in the number of assembled genomes deposited in the public archives. This huge increase in DNA sequence data presents new challenges for the annotation, analysis and visualization bioinformatics tools. New strategies have been developed for the annotation and representation of reference genomes and sequence variations derived from population studies and clinical outbreaks.