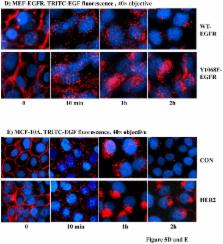 One of the causes of breast cancer is overexpression of the human epidermal growth factor receptor 2 (HER2). Enhanced receptor autophosphorylation and resistance to activation-induced down regulation have been suggested as mechanisms for HER2-induced sustained signaling and cell transformation. However, the molecular mechanisms underlying these possibilities remain incompletely understood. In the current report, we present evidence that show that HER2 overexpression does not lead to receptor hyper-autophosphorylation, but alters patterns in a manner that favors receptor stability and sustained signaling. Specifically, HER2 overexpression blocks EGFR tyrosine phosphorylation on Y1045 and Y1068, the known docking sites of c-Cbl and Grb2, respectively, while promoting phosphorylation on Y1173, the known docking site of the Gab adaptor proteins and phospholipase C gamma (PLCγ). Under these conditions, HER2 itself is phosphorylated on Y1221/1222, with no known role, and on Y1248 that corresponds to Y1173 of EGFR. Interestingly, suppressed EGFR autophosphorylation on the Grb2 and c-Cbl binding sites correlated with receptor stability and sustained signaling, suggesting that HER2 accomplishes these tasks by altering autophosphorylation patterns. In conformity with these findings, mutation of the Grb2 binding site on EGFR (Y1068F-EGFR) conferred resistance to ligand-induced degradation which in turn induced sustained signaling, and increased cell proliferation and transformation. These findings suggest that the Grb2 binding site on EGFR is redundant for signaling, but critical for receptor regulation. On the other hand, mutation of the putative Grb2 binding site in HER2 (Y1139) did not affect stability, signaling or transformation, suggesting that Y1139 in HER2 may not serve as a Grb2 binding site. In agreement with the role of EGFR in HER2 signaling, inhibition of EGFR expression reduced HER2-induced anchorage-independent growth and tumorigenesis. These results imply that complementing HER2-targeted therapies with anti-EGFR drugs may be beneficial in HER2-positive breast cancer.

Jayanta Debnath,  Joan S Brugge,  Senthil Muthuswamy (2003)
The three-dimensional culture of MCF-10A mammary epithelial cells on a reconstituted basement membrane results in formation of polarized, growth-arrested acini-like spheroids that recapitulate several aspects of glandular architecture in vivo. Oncogenes introduced into MCF-10A cells disrupt this morphogenetic process, and elicit distinct morphological phenotypes. Recent studies analyzing the mechanistic basis for phenotypic heterogeneity observed among different oncogenes (e.g., ErbB2, cyclin D1) have illustrated the utility of this three-dimensional culture system in modeling the biological activities of cancer genes, particularly with regard to their ability to disrupt epithelial architecture during the early aspects of carcinoma formation. Here we provide a collection of protocols to culture MCF-10A cells, to establish stable pools expressing a gene of interest via retroviral infection, as well as to grow and analyze MCF-10A cells in three-dimensional basement membrane culture.

The Ras-RasGAP complex: structural basis for GTPase activation and its loss in oncogenic Ras mutants.

A Wittinghofer,  Mark Schmitz,  K Scheffzek … (1997)
The three-dimensional structure of the complex between human H-Ras bound to guanosine diphosphate and the guanosine triphosphatase (GTPase)-activating domain of the human GTPase-activating protein p120GAP (GAP-334) in the presence of aluminum fluoride was solved at a resolution of 2.5 angstroms. The structure shows the partly hydrophilic and partly hydrophobic nature of the communication between the two molecules, which explains the sensitivity of the interaction toward both salts and lipids. An arginine side chain (arginine-789) of GAP-334 is supplied into the active site of Ras to neutralize developing charges in the transition state. The switch II region of Ras is stabilized by GAP-334, thus allowing glutamine-61 of Ras, mutation of which activates the oncogenic potential, to participate in catalysis. The structural arrangement in the active site is consistent with a mostly associative mechanism of phosphoryl transfer and provides an explanation for the activation of Ras by glycine-12 and glutamine-61 mutations. Glycine-12 in the transition state mimic is within van der Waals distance of both arginine-789 of GAP-334 and glutamine-61 of Ras, and even its mutation to alanine would disturb the arrangements of residues in the transition state.

A central role for HER3 in HER2-amplified breast cancer: implications for targeted therapy.

Alan Stern,  Nhan T. Pham,  S Lee … (2008)
Epidermal growth factor receptor (EGFR) and HER3 each form heterodimers with HER2 and have independently been implicated as key coreceptors that drive HER2-amplified breast cancer. Some studies suggest a dominant role for EGFR, a notion of renewed interest given the development of dual HER2/EGFR small-molecule inhibitors. Other studies point to HER3 as the primary coreceptor. To clarify the relative contributions of EGFR and HER3 to HER2 signaling, we studied receptor knockdown via small interfering RNA technology across a panel of six HER2-overexpressing cell lines. Interestingly, HER3 was as critical as HER2 for maintaining cell proliferation in most cell lines, whereas EGFR was dispensable. Induction of HER3 knockdown in the HER2-overexpressing BT474M1 cell line was found to inhibit growth in three-dimensional culture and induce rapid tumor regression of in vivo xenografts. Furthermore, preferential phosphorylation of HER3, but not EGFR, was observed in HER2-amplified breast cancer tissues. Given these data suggesting HER3 as an important therapeutic target, we examined the activity of pertuzumab, a HER2 antibody that inhibits HER3 signaling by blocking ligand-induced HER2/HER3 heterodimerization. Pertuzumab inhibited ligand-dependent morphogenesis in three-dimensional culture and induced tumor regression in the heregulin-dependent MDA-MB-175 xenograft model. Importantly, these activities of pertuzumab were distinct from those of trastuzumab, a monoclonal antibody currently used for treatment of HER2-amplified breast cancer patients. Our data suggest that inhibition of HER3 may be more clinically relevant than inhibition of EGFR in HER2-amplified breast cancer and also suggest that adding pertuzumab to trastuzumab may augment therapeutic benefit by blocking HER2/HER3 signaling.