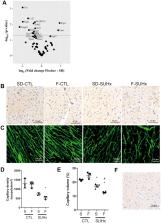 The ability of the right ventricle (RV) to adapt to increased afterload is the major determinant of survival in patients with pulmonary hypertension (PH). In this study, we explored the effect of genetic background on RV adaptation and survival in a rat model of severe pulmonary arterial hypertension (PAH).

Fischer rats are prone to develop RV failure in response to increased afterload. Moreover, the high mortality in the SUHx model of severe PAH was caused by a failure of RV adaptation associated with lack of adequate microvascular angiogenesis, together with metabolic and immunological responses in the hypertrophied RV.

Yaron Hamani,  C. Greenfield,  D Prus … (2006)
Human CD56(bright) NK cells accumulate in the maternal decidua during pregnancy and are found in direct contact with fetal trophoblasts. Several mechanisms have been proposed to explain the inability of NK cells to kill the semiallogeneic fetal cells. However, the actual functions of decidual NK (dNK) cells during pregnancy are mostly unknown. Here we show that dNK cells, but not peripheral blood-derived NK subsets, regulate trophoblast invasion both in vitro and in vivo by production of the interleukin-8 and interferon-inducible protein-10 chemokines. Furthermore, dNK cells are potent secretors of an array of angiogenic factors and induce vascular growth in the decidua. Notably, such functions are regulated by specific interactions between dNK-activating and dNK-inhibitory receptors and their ligands, uniquely expressed at the fetal-maternal interface. The overall results support a 'peaceful' model for reproductive immunology, in which elements of innate immunity have been incorporated in a constructive manner to support reproductive tissue development.

C Handschin,  George Spiegelman (2006)
Many biological programs are regulated at the transcriptional level. This is generally achieved by the concerted actions of several transcription factors. Recent findings have shown that, in many cases, transcriptional coactivators coordinate the overall regulation of the biological programs. One of the best-studied examples of coactivator control of metabolic pathways is the peroxisome proliferator-activated receptor coactivator 1 (PGC-1) family. These proteins are strong activators of mitochondrial function and are thus dominant regulators of oxidative metabolism in a variety of tissues. The PGC-1 coactivators themselves are subject to powerful regulation at the transcriptional and posttranslational levels. Recent studies have elucidated the function of the PGC-1 coactivators in different tissues and have highlighted the implications of PGC-1 dysregulation in diseases such as diabetes, obesity, cardiomyopathy, or neurodegeneration.