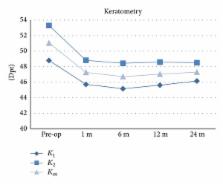 Purpose. The aim of this work was to evaluate the results after combined surgery implantation of full rings and CXL in one session in a group of patients with keratoconus during a 12-month follow-up. Material and Methods. The study included 22 eyes of 20 keratoconic patients, mean age of 28.41 (from 18 to 50) years. A full ring was inserted and afterwards 0.1% riboflavin solution was injected into the corneal pocket through the incision tunnel. The cornea was irradiated with UV-A light for 30 minutes. Postoperative visits were scheduled for the first week and months 1, 3, 6, 12, and 24 after surgery. Minimal follow-up time was 12 months. Results. The mean UDVA improved by 6 lines from before the operation to 1 year after the operation, the mean CDVA improved by approximately 2.5 lines, and the mean K improved by 3.94 D. Statistically significant reductions of sphere ( P < 0.001), cylinder ( P = 0.004), and spherical ( P < 0.001) equivalents were found 1 month after surgery. Conclusion. The combined surgery MyoRing implantation and CXL seems to be a safe method in the treatment of keratoconus. We noticed an improvement of the refractive error in all of our patients.

Riboflavin/ultraviolet-a–induced collagen crosslinking for the treatment of keratoconus

Stress-strain measurements of human and porcine corneas after riboflavin-ultraviolet-A-induced cross-linking.