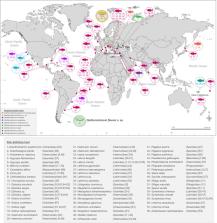 Diphterostomum brusinae (Zoogonidae) is a digenean species that has been recorded worldwide parasitizing marine fishes. Several species have been synonymized with D. brusinae because they lack conspicuous morphological differences. However, due to the breadth of its geographic distribution and the variety of hosts involved in the life cycles, it is likely to be an assemblage of cryptic species. Diphterostomum flavum n. sp. is described here as a morphologically cryptic relative of D. brusinae, in the fish Pinguipes brasilianus (Pinguipedidae) off the Patagonian coast, Southwestern Atlantic Ocean, and its life cycle is elucidated through morphology and molecular analysis. This species uses the gastropod Buccinanops deformis (Nassariidae) as first and second intermediate host with metacercariae encysting within sporocysts. They also, however, use the polychaete Kinbergonuphis dorsalis (Onuphidae) as second intermediate host. No morphological differences were found between adults of D. flavum n. sp. and D. brusinae; however, the number of penetration glands of the cercariae, a diagnostic feature, differed (9 vs. 3 pairs), as well as the ITS2 sequences for the two species. This work provides morphological and molecular evidence of cryptic diversification among species described as D. brusinae, in which the only clear differences are in larval morphology and host spectrum. The strict specificity to the snail acting as the first intermediate host and the variety of fishes with different feeding habits acting as definitive hosts support the likely existence of multiple cryptic species around the world.

Mark Torchin,  E Dunham,  Satoshi Chiba … (2005)
Cryptic species of the digeneans, Cercaria batillariae (Heterophyidae) and an undescribed philophthalmid, were detected using polymerase chain reaction-based restriction fragment-length polymorphism methodology and sequence analyses. These digeneans were all collected from the same species of gastropod first intermediate host, Batillaria cumingi (=Batillaria attramentaria). The mitochondrial cytochrome oxidase subunit 1 gene (approximately 800bp) and nuclear internal transcribed spacer 1 gene (approximately 400bp) were used for species level discrimination. Restriction fragment-length polymorphism analyses of cytochrome oxidase subunit 1 gene showed that C. batillariae included 10 distinguishable fragment patterns, and the philophthalmid included five patterns. On the basis of subsequent sequence analyses, the restriction fragment length polymorphism patterns of C. batillariae were grouped into eight phylogenetically distinct lineages and those of the philophthalmid into three phylogenetically distinct lineages. There was no evidence of gene flow among the different lineages due to the lack of heterozygosity within the observed internal transcribed spacer 1 gene fragment patterns. This suggests that all of these lineages are different species. Most of these species were widespread, but some exhibited restricted geographic distributions. We discuss the implications of these findings for host specificity of these trematodes. These results demonstrate the utility of genetic analysis to distinguish species of morphologically similar trematodes. Hence, trematode species diversity may often be underestimated when species identifications are limited to morphological features.

Jillian Detwiler,  David H Bos,  Dennis Minchella (2010)
The recognition of cryptic parasite species has implications for evolutionary and population-based studies of wildlife and human disease. Echinostome trematodes are a widely distributed, species-rich group of internal parasites that infect a wide array of hosts and are agents of disease in amphibians, mammals, and birds. We utilize genetic markers to understand patterns of morphology, host use, and geographic distribution among several species groups. Parasites from >150 infected host snails (Lymnaea elodes, Helisoma trivolvis and Biomphalaria glabrata) were sequenced at two mitochondrial genes (ND1 and CO1) and one nuclear gene (ITS) to determine whether cryptic species were present at five sites in North and South America. Phylogenetic and network analysis demonstrated the presence of five cryptic Echinostoma lineages, one Hypoderaeum lineage, and three Echinoparyphium lineages. Cryptic life history patterns were observed in two species groups, Echinostoma revolutum and Echinostoma robustum, which utilized both lymnaied and planorbid snail species as first intermediate hosts. Molecular evidence confirms that two species, E. revolutum and E. robustum, have cosmopolitan distributions while other species, E. trivolvis and Echinoparyphium spp., may be more geographically limited. The intra and interspecific variation detected in our study provides a genetic basis for seven species groups of echinostomes which will help accurately identify agents of disease as well as reveal cryptic aspects of trematode biology. Copyright 2010 Elsevier Inc. All rights reserved.

A comparison between mitochondrial DNA and the ribosomal internal transcribed regions in prospecting for cryptic species of platyhelminth parasites.

John Criscione,  R Vilas,  Cédric Blouin (2005)
We examined the relative merits of mitochondrial DNA loci and ribosomal DNA internal transcribed spacers for their use in prospecting for cryptic species of platyhelminth parasites. Sequence divergence at ITS1 and ITS2 was compared with divergence at 2 mtDNA loci (NADH dehydrogenase-1 and cytochrome c oxidase I) between closely related species of trematodes and cestodes. Both spacers accumulated substitutions substantially more slowly than mtDNA, which clearly shows a higher level of divergence among species relative to intra-specific variation. Besides a slow rate of substitution, other caveats that may be encountered when using ITS sequences as a prospecting marker are discussed. In particular, we note recent studies that suggest the existence of substantial levels of intra-individual variation in ITS sequences of flatworms. Because it is likely that closely related species share this phenomenon, it may confound the detection of cryptic species, especially if small sample sizes are studied. Although potential limitations of mtDNA are also recognized, the higher rate of evolution and smaller effective population size of this marker increases the probability of detecting diagnostic characters between cryptic species.