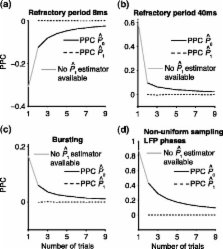 Neuronal synchrony: a versatile code for the definition of relations?

Cornelis Stam, Guido Nolte, Andreas Daffertshofer (2007)
To address the problem of volume conduction and active reference electrodes in the assessment of functional connectivity, we propose a novel measure to quantify phase synchronization, the phase lag index (PLI), and compare its performance to the well-known phase coherence (PC), and to the imaginary component of coherency (IC). The PLI is a measure of the asymmetry of the distribution of phase differences between two signals. The performance of PLI, PC, and IC was examined in (i) a model of 64 globally coupled oscillators, (ii) an EEG with an absence seizure, (iii) an EEG data set of 15 Alzheimer patients and 13 control subjects, and (iv) two MEG data sets. PLI and PC were more sensitive than IC to increasing levels of true synchronization in the model. PC and IC were influenced stronger than PLI by spurious correlations because of common sources. All measures detected changes in synchronization during the absence seizure. In contrast to PC, PLI and IC were barely changed by the choice of different montages. PLI and IC were superior to PC in detecting changes in beta band connectivity in AD patients. Finally, PLI and IC revealed a different spatial pattern of functional connectivity in MEG data than PC. The PLI performed at least as well as the PC in detecting true changes in synchronization in model and real data but, at the same token and like-wise the IC, it was much less affected by the influence of common sources and active reference electrodes. Copyright 2007 Wiley-Liss, Inc.

Guido Nolte, Ou Bai, Lewis A. Wheaton … (2004)
The main obstacle in interpreting EEG/MEG data in terms of brain connectivity is the fact that because of volume conduction, the activity of a single brain source can be observed in many channels. Here, we present an approach which is insensitive to false connectivity arising from volume conduction. We show that the (complex) coherency of non-interacting sources is necessarily real and, hence, the imaginary part of coherency provides an excellent candidate to study brain interactions. Although the usual magnitude and phase of coherency contain the same information as the real and imaginary parts, we argue that the Cartesian representation is far superior for studying brain interactions. The method is demonstrated for EEG measurements of voluntary finger movement. We found: (a) from 5 s before to movement onset a relatively weak interaction around 20 Hz between left and right motor areas where the contralateral side leads the ipsilateral side; and (b) approximately 2-4 s after movement, a stronger interaction also at 20 Hz in the opposite direction. It is possible to reliably detect brain interaction during movement from EEG data. The method allows unambiguous detection of brain interaction from rhythmic EEG/MEG data.