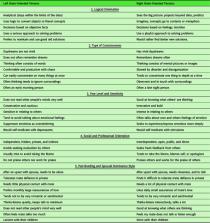 Brain laterality refers to the asymmetric location of functional elements within the bilateral brain of animals and humans. Thus far, five lateralized functions have been recognized in humans: handedness, language ability, spatial skills, facial recognition, and emotion recognition. Recently, a sixth asymmetric functional element bearing on personality has been discovered. It is the larger side of the split bilateral anterior cingulate cortex (ACC). This appears to be the final output element of the executive system of which, by logic, there can be only one. Which side is somewhat larger varies among the general population in a seemingly idiosyncratic manner, yet with a genetic basis because true-breeding lineages exist. Here, hemisity is binary measure where a person is inherently born either right brain or left brain oriented. This is determined by nine statistically robust sets of four biophysical tests, none of which depend upon personality, and five behavioral questionnaires. Crucially these hemisity methods have been validated by the Magnetic Resonance Imaging (MRI)-based discovery that the larger side of the ACC is on the same side as one’s hemisity, making MRI the primary standard for hemisity determination ( r = 0.96). There are at least 30 measurable differences in individual characteristics and behaviors between those persons whose hemsity is on the right compared to those with it on the left. The hemisity of 2929 individuals was determined by these methods. Large groups included 1428 junior and senior high schools students both in Hawaii and Utah. There were somewhat comparable numbers present for both types of hemisity. Hemisity of individuals was found stable from infancy to old age. There was no relation between hemisity and handedness. Larger corpus callosum (CC) size of male or female subjects was larger in right brainer that in left brainers. Twin studies demonstrate that CC size is inherited. Thirty-eight percent of individuals of both sexes were right brain oriented, while 62% of individuals of both sexes were left brain oriented. In pairings, there were more than twice as many couples with opposite hemisity. Of these couples, the right brain male and females were dominant. Reproductive outcomes of these were “Like father like son, Like mother like daughter.”

Seeing and imagining in the cerebral hemispheres: a computational approach.

J J Hutsler,  Ralf Galuske (2003)
Since the middle of the 19th century it has been recognized that several higher cognitive functions, including language, are lateralized in cerebral cortex. Neuropsychological studies on patients with brain lesions and rapid developments in brain imaging techniques have provided us with an increasing body of data on the functional aspects of language lateralization, but little is known about the substrate on which these specializations are realized. Much attention has been focused on the gross size and shape of cortical regions involved, but recent findings indicate that the columnar and connectional structure within auditory and language cortex in the left hemisphere are distinct from those in homotopic regions in the right hemisphere. These findings concern parameters that are closely linked to the processing architecture within the respective regions. Thus, the comparison of these microanatomical specializations with their respective functional counterparts provides important insights into the functional role of cerebral cortical organization and its consequences for processing of cortical information in the implementation of complex cognitive functions.

Department of Biochemistry and Biophysics, John A. Burns School of Medicine, University of Hawaii , Honolulu, Hawaii

This is an Open Access article, distributed under the terms of the Creative Commons Attribution-NonCommercial-NoDerivatives licence ( http://creativecommons.org/licenses/by-nc-nd/4.0/), which permits non-commercial re-use, distribution, and reproduction in any medium, provided the original work is unaltered and is properly cited. The written permission of Cambridge University Press must be obtained for commercial re-use or in order to create a derivative work.