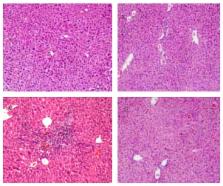 Objectives. The aim of this study is researching the role of the Regulatory T cell (Treg)/T helper cell-17 (Th17) cell ratio imbalance in the pathogenesis of autoimmune hepatitis (AIH) and the use of the “Bu Xu Hua Yu” recipe in the treatment of AIH. Materials and Methods. Sixty adult male C57/BL6 mice were divided into six different groups. α-Galcer was injected abdominally for production of the animal models. Liver function tests, histological examinations, liver tissue Regulatory T cell, and T helper cell-17 levels tests were carried out. TGF- β1, IL-10, IL-17, and expression of mRNA and protein levels of Foxp3 and ROR- γt were also assessed. Results. Bu Xu Hua Yu method increased the levels of Regulatory T cell, IL-10, and the expression of Foxp3 ( P < 0.05) in mice liver tissues. Furthermore, there were decreases in the levels of T helper cell-17, IL-17, and expression of ROR γt mRNA and protein ( P < 0.05). The ratio of Treg/Th17 was increased ( P < 0.05). Conclusion. Mice with AIH have a Treg/Th17 ratio imbalance. Bu Xu Hua Yu method was able to restore the cellular balance of Treg/Th17 through the regulation of the expression of ROR γt and Foxp3 and can play an important role in the treatment of AIH.

Michael Ehrenstein,  Jamie Evans,  Animesh Singh … (2004)
Regulatory T cells have been clearly implicated in the control of disease in murine models of autoimmunity. The paucity of data regarding the role of these lymphocytes in human autoimmune disease has prompted us to examine their function in patients with rheumatoid arthritis (RA). Regulatory (CD4+CD25+) T cells isolated from patients with active RA displayed an anergic phenotype upon stimulation with anti-CD3 and anti-CD28 antibodies, and suppressed the proliferation of effector T cells in vitro. However, they were unable to suppress proinflammatory cytokine secretion from activated T cells and monocytes, or to convey a suppressive phenotype to effector CD4+CD25− T cells. Treatment with antitumor necrosis factor α (TNFα; Infliximab) restored the capacity of regulatory T cells to inhibit cytokine production and to convey a suppressive phenotype to “conventional” T cells. Furthermore, anti-TNFα treatment led to a significant rise in the number of peripheral blood regulatory T cells in RA patients responding to this treatment, which correlated with a reduction in C reactive protein. These data are the first to demonstrate that regulatory T cells are functionally compromised in RA, and indicate that modulation of regulatory T cells by anti-TNFα therapy may be a further mechanism by which this disease is ameliorated.