A clinical report of the massive CAG repeat expansion in spinocerebellar ataxia type 2: Severe onset in a Mexican child and review previous cases 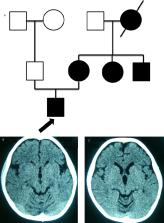 The spinocerebellar ataxia type 2 is a neurodegenerative disease with autosomal dominant inheritance; clinically characterized by progressive cerebellar ataxia, slow ocular saccades, nystagmus, ophthalmoplegia, dysarthria, dysphagia, cognitive deterioration, mild dementia, peripheral neuropathy. Infantile onset is a rare presentation that only has been reported in four instances in the literature. In the present work a boy aged 5 years 7 months was studied due to horizontal gaze-evoked nystagmus, without saccades, ataxic gait, dysarthria, dysphagia, dysmetria, generalized spasticity mainly pelvic, bilateral Babinsky. The mother aged 27 years-old presented progressive cerebellar ataxia, dysarthria, dysmetria, dysdiadochokinesis, limb ataxia and olivopontocerebellar atrophy. The molecular analysis was made by identifying the expansion repeats in tandem by long PCR to analyze the repeats in the ATXN2 gene. We found an extreme CAG expansion repeats of ~884 repeats in the child. We describe a Mexican child affected by SCA2 with an infantile onset, associated with a high number of CAG repeats previously no reported and anticipation phenomenon.

A Srivastava,  Zeshan S Choudhry,  S. Jain … (2001)
Spinocerebellar ataxia 2 (SCA2) is an autosomal dominant neurodegenerative disorder that results from the expansion of a cryptic CAG repeat within the exon 1 of the SCA2 gene. The CAG repeat in normal individuals varies in length from 14 to 31 repeats and is frequently interrupted by one or more CAA triplets, whereas the expanded alleles contain a pure uninterrupted stretch of 34 to 59 CAG repeats. We have previously reported the presence of a limited pool of 'ancestral' or 'at risk' haplotypes for the expanded SCA2 alleles in the Indian population. We now report the identification of two novel single nucleotide polymorphisms (SNPs) in exon 1 of the SCA2 gene and their characterization in 215 normal and 64 expanded chromosomes. The two biallelic SNPs distinguished two haplotypes, GT and CC, each of which formed a predominant haplotype associated with normal and expanded SCA2 alleles. All the expanded alleles segregated with CC haplotype, which otherwise was associated with only 29.3% of the normal chromosomes. CAA interspersion analysis revealed that majority of the normal alleles with CC haplotype were either pure or lacked the most proximal 5' CAA interruption. The repeat length variation at SCA2 locus also appeared to be polar with changes occurring mostly at the 5' end of the repeat. Our results demonstrate that CAA interruptions play an important role in conferring stability to SCA2 repeat and their absence predisposes alleles towards instability and pathological expansion. Our study also provides new haplotypes associated with SCA2 that should prove useful in further understanding the mutational history and mechanism of repeat instability at the SCA2 locus.

A Mankodi,  Rishi J Desai,  N H Wadia … (1998)
Clinical revaluation and genetic analysis of six Indian pedigrees, segregating autosomal dominant cerebellar ataxia, slow saccades and peripheral neuropathy, has been undertaken, and expansion at the spinocerebellar ataxia 2 (SCA2) locus was confirmed in 14 affected family members. These families became available from 31 phenotypically similar families seen over the years. In common with other neurodegenerative disorders resulting from expansion of a CAG trinucleotide repeat motif, an inverse correlation between repeat size and age at onset and severity is observed, although the size range (36-45 repeat units) for the expanded alleles is comparatively limited. Saccadic velocity was reduced in all our patients, even in the early stages of the disease. The observation of slow saccades in affected individuals has been proposed previously as an important diagnostic criterion serving to distinguish the SCA2 phenotype. This is now confirmed in a retrospective study of the clinical literature, facilitated by the cloning of the SCA2 gene and the subsequent genetic analysis of families segregating this phenotype. We therefore argue that the clinical appraisal of 'ophthalmoplegia' be subject to more precise definition, as differentiation between the various types of ocular dysfunction can be an important adjunct to diagnosis.

D Babovic-Vuksanovic,  V Michels,  Ángeles Patterson … (1998)
Autosomal dominant cerebellar ataxias are a heterogeneous group of neurodegenerative disorders that generally present in adulthood. Spinocerebellar ataxia type 2 typically presents with progressive cerebellar symptoms, slow ocular saccades, and peripheral neuropathy. The onset of symptoms is usually between 20 and 40 years. We describe an infant who presented with neonatal hypotonia, developmental delay, and dysphagia. Ocular findings of retinitis pigmentosa were noted at 10 months. Her father had mild spinocerebellar ataxia first noted at age 22 years. Molecular studies of the SCA2 gene showed a CAG expansion of 43 repeats in the father and an extreme CAG repeat expansion of more than 200 in the baby. Our report expands the known phenotype and genotype of SCA2. Testing for dominant ataxias should be included in the evaluation of infants with nonspecific progressive neurologic symptoms and retinitis pigmentosa, especially in cases with a positive family history for spinocerebellar ataxia.

License information: This is an open-access article distributed under the terms of the Creative Commons Attribution License (type CC-BY), which permits unrestricted use, distribution and reproduction in any medium, provided the original article is properly cited.