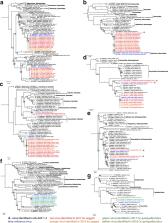 Mosquitoes are the most important invertebrate viral vectors in humans and harbor a high diversity of understudied viruses, which has been shown in many mosquito virome studies in recent years. These studies generally performed metagenomics sequencing on pools of mosquitoes, without assessment of the viral diversity in individual mosquitoes. To address this issue, we applied our optimized viral metagenomics protocol (NetoVIR) to compare the virome of single and pooled Aedes aegypti and Culex quinquefasciatus mosquitoes collected from different locations in Guadeloupe, in 2016 and 2017.

The total read number and viral reads proportion of samples containing a single mosquito have no significant difference compared with those of pools containing five mosquitoes, which proved the feasibility of using single mosquito for viral metagenomics. A comparative analysis of the virome revealed a higher abundance and more diverse eukaryotic virome in Aedes aegypti, whereas Culex quinquefasciatus harbors a richer and more diverse phageome. The majority of the identified eukaryotic viruses were mosquito-species specific. We further characterized the genomes of 11 novel eukaryotic viruses. Furthermore, qRT-PCR analyses of the six most abundant eukaryotic viruses indicated that the majority of individual mosquitoes were infected by several of the selected viruses with viral genome copies per mosquito ranging from 267 to 1.01 × 10 8 (median 7.5 × 10 6) for Ae. aegypti and 192 to 8.69 × 10 6 (median 4.87 × 10 4) for Cx. quinquefasciatus. Additionally, in Cx. quinquefasciatus, a number of phage contigs co-occurred with several marker genes of Wolbachia sp. strain wPip.

We firstly demonstrate the feasibility to use single mosquito for viral metagenomics, which can provide much more precise virome profiles of mosquito populations. Interspecific comparisons show striking differences in abundance and diversity between the viromes of Ae. aegypti and Cx. quinquefasciatus. Those two mosquito species seem to have their own relatively stable "core eukaryotic virome", which might have important implications for the competence to transmit important medically relevant arboviruses. The presence of Wolbachia in Cx. quinquefasciatus might explain (1) the lower overall viral load compared to Ae. aegypti, (2) the identification of multiple unknown phage contigs, and (3) the difference in competence for important human pathogens. How these viruses, phages, and bacteria influence the physiology and vector competence of mosquito hosts warrants further research.

Thais Chouin-Carneiro,  Anubis Vega-Rúa,  Marie Vazeille … (2016)
Background Since the major outbreak in 2007 in the Yap Island, Zika virus (ZIKV) causing dengue-like syndromes has affected multiple islands of the South Pacific region. In May 2015, the virus was detected in Brazil and then spread through South and Central America. In December 2015, ZIKV was detected in French Guiana and Martinique. The aim of the study was to evaluate the vector competence of the mosquito spp. Aedes aegypti and Aedes albopictus from the Caribbean (Martinique, Guadeloupe), North America (southern United States), South America (Brazil, French Guiana) for the currently circulating Asian genotype of ZIKV isolated from a patient in April 2014 in New Caledonia. Methodology/Principal Findings Mosquitoes were orally exposed to an Asian genotype of ZIKV (NC-2014-5132). Upon exposure, engorged mosquitoes were maintained at 28°±1°C, a 16h:8h light:dark cycle and 80% humidity. 25–30 mosquitoes were processed at 4, 7 and 14 days post-infection (dpi). Mosquito bodies (thorax and abdomen), heads and saliva were analyzed to measure infection, dissemination and transmission, respectively. High infection but lower disseminated infection and transmission rates were observed for both Ae. aegypti and Ae. albopictus. Ae. aegypti populations from Guadeloupe and French Guiana exhibited a higher dissemination of ZIKV than the other Ae. aegypti populations examined. Transmission of ZIKV was observed in both mosquito species at 14 dpi but at a low level. Conclusions/Significance This study suggests that although susceptible to infection, Ae. aegypti and Ae. albopictus were unexpectedly low competent vectors for ZIKV. This may suggest that other factors such as the large naïve population for ZIKV and the high densities of human-biting mosquitoes contribute to the rapid spread of ZIKV during the current outbreak.

Nádia Conceição-Neto,  Mark Zeller,  Hanne Lefrère … (2015)
A major limitation for better understanding the role of the human gut virome in health and disease is the lack of validated methods that allow high throughput virome analysis. To overcome this, we evaluated the quantitative effect of homogenisation, centrifugation, filtration, chloroform treatment and random amplification on a mock-virome (containing nine highly diverse viruses) and a bacterial mock-community (containing four faecal bacterial species) using quantitative PCR and next-generation sequencing. This resulted in an optimised protocol that was able to recover all viruses present in the mock-virome and strongly alters the ratio of viral versus bacterial and 16S rRNA genetic material in favour of viruses (from 43.2% to 96.7% viral reads and from 47.6% to 0.19% bacterial reads). Furthermore, our study indicated that most of the currently used virome protocols, using small filter pores and/or stringent centrifugation conditions may have largely overlooked large viruses present in viromes. We propose NetoVIR (Novel enrichment technique of VIRomes), which allows for a fast, reproducible and high throughput sample preparation for viral metagenomics studies, introducing minimal bias. This procedure is optimised mainly for faecal samples, but with appropriate concentration steps can also be used for other sample types with lower initial viral loads.