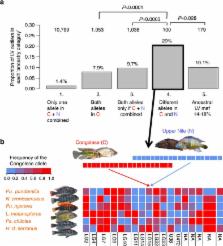 Understanding why some evolutionary lineages generate exceptionally high species diversity is an important goal in evolutionary biology. Haplochromine cichlid fishes of Africa's Lake Victoria region encompass >700 diverse species that all evolved in the last 150,000 years. How this ‘Lake Victoria Region Superflock' could evolve on such rapid timescales is an enduring question. Here, we demonstrate that hybridization between two divergent lineages facilitated this process by providing genetic variation that subsequently became recombined and sorted into many new species. Notably, the hybridization event generated exceptional allelic variation at an opsin gene known to be involved in adaptation and speciation. More generally, differentiation between new species is accentuated around variants that were fixed differences between the parental lineages, and that now appear in many new combinations in the radiation species. We conclude that hybridization between divergent lineages, when coincident with ecological opportunity, may facilitate rapid and extensive adaptive radiation.

Cichlids underwent a rapid diversification in the Lake Victoria region, expanding to more than 700 species within 150,000 years. Here, Meier and colleagues show that an ancient hybridization between two divergent cichlid lineages generated high genetic diversity that facilitated the rapid radiation.

M Buerkle,  R Väinölä,  C. Smadja … (2013)
Hybridization has many and varied impacts on the process of speciation. Hybridization may slow or reverse differentiation by allowing gene flow and recombination. It may accelerate speciation via adaptive introgression or cause near-instantaneous speciation by allopolyploidization. It may have multiple effects at different stages and in different spatial contexts within a single speciation event. We offer a perspective on the context and evolutionary significance of hybridization during speciation, highlighting issues of current interest and debate. In secondary contact zones, it is uncertain if barriers to gene flow will be strengthened or broken down due to recombination and gene flow. Theory and empirical evidence suggest the latter is more likely, except within and around strongly selected genomic regions. Hybridization may contribute to speciation through the formation of new hybrid taxa, whereas introgression of a few loci may promote adaptive divergence and so facilitate speciation. Gene regulatory networks, epigenetic effects and the evolution of selfish genetic material in the genome suggest that the Dobzhansky-Muller model of hybrid incompatibilities requires a broader interpretation. Finally, although the incidence of reinforcement remains uncertain, this and other interactions in areas of sympatry may have knock-on effects on speciation both within and outside regions of hybridization. © 2013 The Authors. Journal of Evolutionary Biology © 2013 European Society For Evolutionary Biology.

Dynamics of mitochondrial DNA evolution in animals: amplification and sequencing with conserved primers.