The haemangioblast generates haematopoietic cells through a haemogenic endothelium stage 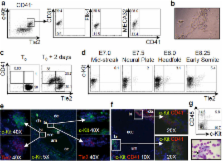 Role of the Flt-1 receptor tyrosine kinase in regulating the assembly of vascular endothelium.

Loren Fong,  M. Florencia Breitman,  M Gertsenstein … (1995)
The vascular endothelial growth factor (VEGF) and its high-affinity binding receptors, the tyrosine kinases Flt-1 and Flk-1, are thought to be important for the development of embryonic vasculature. Here we report that Flt-1 is essential for the organization of embryonic vasculature, but is not essential for endothelial cell differentiation. Mouse embryos homozygous for a targeted mutation in the flt-1 locus, flt-1lcz, formed endothelial cells in both embryonic and extra-embryonic regions, but assembled these cells into abnormal vascular channels and died in utero at mid-somite stages. At earlier stages, the blood islands of flt-1lcz homozygotes were abnormal, with angioblasts in the interior as well as on the periphery. We suggest that the Flt-1 signalling pathway may regulate normal endothelial cell-cell or cell-matrix interactions during vascular development.

Development of erythroid and myeloid progenitors in the yolk sac and embryo proper of the mouse.

Correspondence and requests for materials should be addressed to G.L. ( glacaud@ 123456picr.man.ac.uk ).