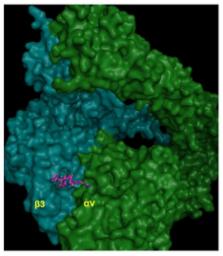 Integrins are heterodimeric, transmembrane receptors that function as mechanosensors, adhesion molecules and signal transduction platforms in a multitude of biological processes. As such, integrins are central to the etiology and pathology of many disease states. Therefore, pharmacological inhibition of integrins is of great interest for the treatment and prevention of disease. In the last two decades several integrin-targeted drugs have made their way into clinical use, many others are in clinical trials and still more are showing promise as they advance through preclinical development. Herein, this review examines and evaluates the various drugs and compounds targeting integrins and the disease states in which they are implicated.

V Henn, J Slupsky, M. Gräfe … (1998)
CD40 ligand (CD40L, CD154), a transmembrane protein structurally related to the cytokine TNF-alpha, was originally identified on stimulated CD4+ T cells, and later on stimulated mast cells and basophils. Interaction of CD40L on T cells with CD40 on B cells is of paramount importance for the development and function of the humoral immune system. CD40 is not only constitutively present on B cells, but it is also found on monocytes, macrophages and endothelial cells, suggesting that CD40L has a broader function in vivo. We now report that platelets express CD40L within seconds of activation in vitro and in the process of thrombus formation in vivo. Like TNF-alpha and interleukin-1, CD40L on platelets induces endothelial cells to secrete chemokines and to express adhesion molecules, thereby generating signals for the recruitment and extravasation of leukocytes at the site of injury. Our results indicate that platelets are not only involved in haemostasis but that they also directly initiate an inflammatory response of the vessel wall.

Crystal structure of the extracellular segment of integrin alpha Vbeta3 in complex with an Arg-Gly-Asp ligand.

Jian-Ping Xiong, Thilo Stehle, Rongguang Zhang … (2002)
The structural basis for the divalent cation-dependent binding of heterodimeric alphabeta integrins to their ligands, which contain the prototypical Arg-Gly-Asp sequence, is unknown. Interaction with ligands triggers tertiary and quaternary structural rearrangements in integrins that are needed for cell signaling. Here we report the crystal structure of the extracellular segment of integrin alphaVbeta3 in complex with a cyclic peptide presenting the Arg-Gly-Asp sequence. The ligand binds at the major interface between the alphaV and beta3 subunits and makes extensive contacts with both. Both tertiary and quaternary changes are observed in the presence of ligand. The tertiary rearrangements take place in betaA, the ligand-binding domain of beta3; in the complex, betaA acquires two cations, one of which contacts the ligand Asp directly and the other stabilizes the ligand-binding surface. Ligand binding induces small changes in the orientation of alphaV relative to beta3.

Conflict of Interest: The authors have declared that no conflict of interest exists.