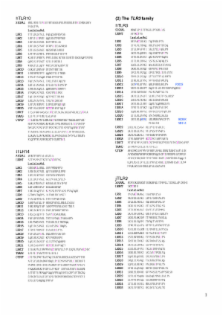 Toll-like receptors (TLRs) play a central role in innate immunity. TLRs are membrane glycoproteins and contain leucine rich repeat (LRR) motif in the ectodomain. TLRs recognize and respond to molecules such as lipopolysaccharide, peptidoglycan, flagellin, and RNA from bacteria or viruses. The LRR domains in TLRs have been inferred to be responsible for molecular recognition. All LRRs include the highly conserved segment, LxxLxLxxNxL, in which "L" is Leu, Ile, Val, or Phe and "N" is Asn, Thr, Ser, or Cys and "x" is any amino acid. There are seven classes of LRRs including "typical" (" T ") and "bacterial" (" S "). All known domain structures adopt an arc or horseshoe shape. Vertebrate TLRs form six major families. The repeat numbers of LRRs and their "phasing" in TLRs differ with isoforms and species; they are aligned differently in various databases. We identified and aligned LRRs in TLRs by a new method described here.

The new method utilizes known LRR structures to recognize and align new LRR motifs in TLRs and incorporates multiple sequence alignments and secondary structure predictions. TLRs from thirty-four vertebrate were analyzed. The repeat numbers of the LRRs ranges from 16 to 28. The LRRs found in TLRs frequently consists of LxxLxLxxNxLxxLxxxxF/LxxLxx (" T ") and sometimes short motifs including LxxLxLxxNxLxxLPx(x)LPxx (" S"). The TLR7 family (TLR7, TLR8, and TLR9) contain 27 LRRs. The LRRs at the N-terminal part have a super-motif of STT with about 80 residues. The super-repeat is represented by STTSTTSTT or _TTSTTSTT . The LRRs in TLRs form one or two horseshoe domains and are mostly flanked by two cysteine clusters including two or four cysteine residue.

Each of the six major TLR families is characterized by their constituent LRR motifs, their repeat numbers, and their patterns of cysteine clusters. The central parts of the TLR1 and TLR7 families and of TLR4 have more irregular or longer LRR motifs. These central parts are inferred to play a key role in the structure and/or function of their TLRs. Furthermore, the super-repeat in the TLR7 family suggests strongly that "bacterial" and "typical" LRRs evolved from a common precursor.

The evolution of vertebrate Toll-like receptors.

Rebecca L. Hood,  Jeffrey Smith,  Lee Rowen … (2005)
The complete sequences of Takifugu Toll-like receptor (TLR) loci and gene predictions from many draft genomes enable comprehensive molecular phylogenetic analysis. Strong selective pressure for recognition of and response to pathogen-associated molecular patterns has maintained a largely unchanging TLR recognition in all vertebrates. There are six major families of vertebrate TLRs. This repertoire is distinct from that of invertebrates. TLRs within a family recognize a general class of pathogen-associated molecular patterns. Most vertebrates have exactly one gene ortholog for each TLR family. The family including TLR1 has more species-specific adaptations than other families. A major family including TLR11 is represented in humans only by a pseudogene. Coincidental evolution plays a minor role in TLR evolution. The sequencing phase of this study produced finished genomic sequences for the 12 Takifugu rubripes TLRs. In addition, we have produced >70 gene models, including sequences from the opossum, chicken, frog, dog, sea urchin, and sea squirt.

Karine Crozat,  Bruce Beutler,  Koichi Tabeta … (2004)
Several subsets of dendritic cells have been shown to produce type I IFN in response to viral infections, thereby assisting the natural killer cell-dependent response that eliminates the pathogen. Type I IFN production can be induced both by unmethylated CpG-oligodeoxynucleotide and by double-stranded RNA. Here, we describe a codominant CpG-ODN unresponsive phenotype that results from an N-ethyl-N-nitrosourea-induced missense mutation in the Tlr9 gene (Tlr9(CpG1)). Mice homozygous for the Tlr9(CpG1) allele are highly susceptible to mouse cytomegalovirus infection and show impaired infection-induced secretion of IFN-alpha/beta and natural killer cell activation. We also demonstrate that both the Toll-like receptor (TLR) 9 --> MyD88 and TLR3 --> Trif signaling pathways are activated in vivo on viral inoculation, and that each pathway contributes to innate defense against systemic viral infection. Whereas both pathways lead to type I IFN production, neither pathway offers full protection against mouse cytomegalovirus infection in the absence of the other. The Tlr9(CpG1) mutation alters a leucine-rich repeat motif and lies within a receptor domain that is conserved within the evolutionary cluster encompassing TLRs 7, 8, and 9. In other TLRs, including three mouse-specific TLRs described in this paper, the affected region is not represented. The phenotypic effect of the Tlr9(CpG1) allele thus points to a critical role for TLR9 in viral sensing and identifies a vulnerable amino acid within the ectodomain of three TLR proteins, essential for a ligand response.

Shizuo Akira,  Tsuneyasu Kaisho (2006)
Mammals sense pathogen invasion through pattern-recognition receptors. A group of transmembrane proteins, Toll-like receptors (TLRs), play critical roles as pattern-recognition receptors. They are mainly expressed on antigen-presenting cells, such as macrophages or dendritic cells, and their signaling activates antigen-presenting cells to provoke innate immunity and to establish adaptive immunity. Each TLR has common effects, such as inflammatory cytokine induction or upregulation of costimulatory molecule expression, but also has its specific function, exemplified by type I IFN-inducing ability. These immunoadjuvant effects are not only critical in antimicrobial immunity but are also involved in manifestations of autoimmunity. Furthermore, some TLR agonists are now promising therapeutic tools for various immune disorders, including allergy. Therefore understanding molecular mechanisms on TLRs should be quite useful in the development of therapeutic maneuvers against allergy and autoimmune diseases.