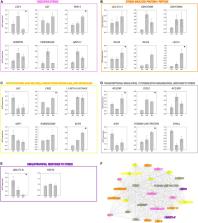 Hymenoglossum cruentum (Hymenophyllaceae) is a poikilohydric, homoiochlorophyllous desiccation-tolerant (DT) epiphyte fern. It can undergo fast and frequent dehydration-rehydration cycles. This fern is highly abundant at high-humidity/low-light microenvironments within the canopy, although rapid changes in humidity and light intensity are frequent. The objective of this research is to identify genes associated to desiccation-rehydration cycle in the transcriptome of H. cruentum to better understand the genetic dynamics behind its desiccation tolerance mechanism. H. cruentum plants were subjected to a 7 days long desiccation-rehydration process and then used to identify key expressed genes associated to its capacity to dehydrate and rehydrate. The relative water content (RWC) and maximum quantum efficiency ( F v/ F m) of H. cruentum fronds decayed to 6% and 0.04, respectively, at the end of the desiccation stage. After re-watering, the fern showed a rapid recovery of RWC and F v/ F m (ca. 73% and 0.8, respectively). Based on clustering and network analysis, our results reveal key genes, such as UBA/TS-N, DYNLL, and LHC, orchestrating intracellular motility and photosynthetic metabolism; strong balance between avoiding cell death and defense ( CAT3, AP2/ERF) when dehydrated, and detoxifying pathways and stabilization of photosystems ( GST, CAB2, and ELIP9) during rehydration. Here we provide novel insights into the genetic dynamics behind the desiccation tolerance mechanism of H. cruentum.

THE MOLECULAR BASIS OF DEHYDRATION TOLERANCE IN PLANTS.

Rebecca Ingram,  Emil Bartels (1996)
Molecular studies of drought stress in plants use a variety of strategies and include different species subjected to a wide range of water deficits. Initial research has by necessity been largely descriptive, and relevant genes have been identified either by reference to physiological evidence or by differential screening. A large number of genes with a potential role in drought tolerance have been described, and major themes in the molecular response have been established. Particular areas of importance are sugar metabolism and late-embryogenesis-abundant (LEA) proteins. Studies have begun to examine mechanisms that control the gene expression, and putative regulatory pathways have been established. Recent attempts to understand gene function have utilized transgenic plants. These efforts are of clear agronomic importance.

YASUNARI FUJITA,  Lam-Son Phan Tran,  Thomas Schmülling … (2011)
Cytokinins (CKs) regulate plant growth and development via a complex network of CK signaling. Here, we perform functional analyses with CK-deficient plants to provide direct evidence that CKs negatively regulate salt and drought stress signaling. All CK-deficient plants with reduced levels of various CKs exhibited a strong stress-tolerant phenotype that was associated with increased cell membrane integrity and abscisic acid (ABA) hypersensitivity rather than stomatal density and ABA-mediated stomatal closure. Expression of the Arabidopsis thaliana ISOPENTENYL-TRANSFERASE genes involved in the biosynthesis of bioactive CKs and the majority of the Arabidopsis CYTOKININ OXIDASES/DEHYDROGENASES genes was repressed by stress and ABA treatments, leading to a decrease in biologically active CK contents. These results demonstrate a novel mechanism for survival under abiotic stress conditions via the homeostatic regulation of steady state CK levels. Additionally, under normal conditions, although CK deficiency increased the sensitivity of plants to exogenous ABA, it caused a downregulation of key ABA biosynthetic genes, leading to a significant reduction in endogenous ABA levels in CK-deficient plants relative to the wild type. Taken together, this study provides direct evidence that mutual regulation mechanisms exist between the CK and ABA metabolism and signals underlying different processes regulating plant adaptation to stressors as well as plant growth and development.

Constraints of tolerance: why are desiccation-tolerant organisms so small or rare?

Peter Alpert (2006)
Drying to equilibrium with the air kills nearly all animals and flowering plants, including livestock and crops. This makes drought a key ecological problem for terrestrial life and a major cause of human famine. However, the ability to tolerate complete desiccation is widespread in organisms that are either <5 mm long or found mainly where desiccation-sensitive organisms are scarce. This suggests that there is a trade-off between desiccation tolerance and growth. Recent molecular and biochemical research shows that organisms tolerate desiccation through a set of mechanisms, including sugars that replace water and form glasses, proteins that stabilize macromolecules and membranes, and anti-oxidants that counter damage by reactive oxygen species. These protections are often induced by drying, and some of the genes involved may be homologous in microbes, plants and animals. Understanding how mechanisms of desiccation tolerance may constrain growth might show how to undo the constraint in some economically important macroorganisms and elucidate the much-studied but elusive relationship between tolerance of stress and productivity.

This article was submitted to Plant Abiotic Stress, a section of the journal Frontiers in Plant Science