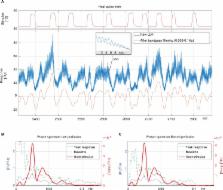 The purpose of this work was to noninvasively detect and quantify microvascular blood flow changes in response to externally applied pain in humans. The responsiveness of the microvasculature to pain stimulation might serve as an objective biomarker in diseases associated with altered pain perception and dysregulated vascular functions. The availability of such a biomarker may be useful as a tool for predicting outcome and response to treatments, particularly in diseases like sickle cell anemia where clinical manifestations are directly linked to microvascular perfusion. We, therefore, developed a method to distinguish the blood flow response due to the test stimulus from the blood flow measurement that also includes concurrent flow changes from unknown origins.

We measured the microvascular blood flow response in 24 healthy subjects in response to a train of randomly spaced and scaled heat pulses on the anterior forearm. The fingertip microvascular perfusion was measured using laser Doppler flowmetry. The cross-correlation between the heat pulses and the blood flow response was computed and tested for significance against the null distribution obtained from the baseline recording using bootstrapping method.

We estimated correlation coefficients, response time, response significance, and the magnitude of vasoreactivity from microvascular blood flow responses. Based on these pain response indices, we identified strong responders and subjects who did not show significant responses.

The cross-correlation of a random pattern of painful stimuli with directly measured microvascular flow can detect vasoconstriction responses in a noisy blood flow signal, determine the time between stimulus and response, and quantify the magnitude of this response. This approach provided an objective measurement of vascular response to pain that may be an inherent characteristic of individual human subjects, and may also be related to the severity of vascular disorders.

Rank Transformations as a Bridge between Parametric and Nonparametric Statistics

Mark Kliger,  Nir Ben-Israel,  Galit Zuckerman … (2013)
The aim of the present study was to develop and validate an objective index for nociception level (NoL) of patients under general anesthesia, based on a combination of multiple physiological parameters. Twenty-five patients scheduled for elective surgery were enrolled. For clinical reference of NoL, the combined index of stimulus and analgesia was defined as a composite of the surgical stimulus level and a scaled effect-site concentration of opioid. The physiological parameters heart rate, heart rate variability (0.15-0.4 Hz band power), plethysmograph wave amplitude, skin conductance level, number of skin conductance fluctuations, and their time derivatives, were extracted. Two techniques to incorporate these parameters into a single index representing the NoL have been proposed: NoLlinear, based on an ordinary linear regression, and NoLnon-linear, based on a non-linear Random Forest regression. NoLlinear and NoLnon-linear significantly increased after moderate to severe noxious stimuli (Wilcoxon rank test, p < 0.01), while the individual parameters only partially responded. Receiver operating curve analysis showed that NoL index based on both techniques better discriminated noxious and non-noxious surgical events [area under curve (AUC) = 0.97] compared with individual parameters (AUC = 0.56-0.74). NoLnon-linear better ranked the level of nociception compared with NoLlinear (R = 0.88 vs. 0.77, p < 0.01). These results demonstrate the superiority of multi-parametric approach over any individual parameter in the evaluation of nociceptive response. In addition, advanced non-linear technique may have an advantage over ordinary linear regression for computing NoL index. Further research will define the usability of the NoL index as a clinical tool to assess the level of nociception during general anesthesia.

P Talke,  K Hamunen,  V Kontinen … (2012)
Photoplethysmographic pulse wave amplitude (PPGA) and heart rate (HR) can be used to measure cold, nociception-induced autonomic responses, or both. The aim of our study was to correlate the intensity of experimental pain to changes in physiological variables reflecting the autonomic nervous system response to pain. PPGA, HR, and subjective measurements of pain intensity were measured in 29 healthy male volunteers during two heat stimuli (43°C and 48°C) and the cold pressor test (CPT). Surgical pleth index (SPI), autonomic nervous system state (ANSS), and ANSS index (ANSSi) were calculated using PPGA and HR. Pain intensity scores increased on the average by 1.6, 3.5, and 8.1 for the 43°C, 48°C, and CPT stimuli, respectively. The pain intensity scores for all three stimuli groups were significantly different from each other (P<0.001). All three stimuli changed HR, PPGA, SPI, ANSS, and ANSSi values significantly from their respective baseline values (P<0.001 for all). Heat stimuli-induced pain intensity did not correlate with the magnitude of the respective changes in HR, PPGA, SPI, ANSS, and ANSSi. CPT-induced pain intensity correlated with the magnitude of the respective changes in HR, PPGA, SPI, ANSS, and ANSSi. PPGA, ANSSi, ANSS, and SPI differentiated between heat and cold stimuli-induced pain. All three thermal stimuli produced a significant change in photoplethysmograph-derived parameters. All photoplethysmograph-derived parameters appear to be suitable to study autonomic nervous system activation.