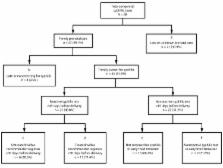 Effectiveness of Prenatal Screening and Treatment to Prevent Congenital Syphilis, Louisiana and Florida, 2013-2014.

Catherine Albright,  Jenna B Emerson,  Erika Werner … (2015)
To estimate the cost to prevent one case of congenital syphilis or fetal or neonatal death with universal third-trimester syphilis rescreening in the United States and to estimate the incidence of syphilis seroconversion at which rescreening becomes cost-effective.

All material in the MMWR Series is in the public domain and may be used and reprinted without permission; citation as to source, however, is appreciated.