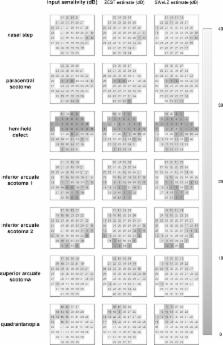 There was no significant difference in accuracy or precision of SWeLZ for the different spatial models relative to ZEST, either when collated across whole fields or when split by input sensitivity. Inspection of VF maps showed that SWeLZ was able to detect localized VF loss. SWeLZ was faster than ZEST for normal VFs: median number of presentations reduced by 20% to 38%. The number of presentations was equivalent for SWeLZ and ZEST when simulated on glaucomatous VFs.

SWeLZ has the potential to reduce VF test times in people with normal VFs, without detriment to output precision and accuracy in glaucomatous VFs.

SWeLZ is a novel perimetric algorithm. Simulations show that SWeLZ can reduce the number of test presentations for people with normal VFs. Since many patients have normal fields, this has the potential for significant time savings in clinical settings.

Mapping the visual field to the optic disc in normal tension glaucoma eyes.

P Ewen King-Smith,  Scott S. Grigsby,  Algis Vingrys … (1994)
QUEST [Watson and Pelli, Perception and Psychophysics, 13, 113-120 (1983)] is an efficient method of measuring thresholds which is based on three steps: (1) Specification of prior knowledge and assumptions, including an initial probability density function (p.d.f.) of threshold (i.e. relative probability of different thresholds in the population). (2) A method for choosing the stimulus intensity of any trial. (3) A method for choosing the final threshold estimate. QUEST introduced a Bayesian framework for combining prior knowledge with the results of previous trials to calculate a current p.d.f.; this is then used to implement Steps 2 and 3. While maintaining this Bayesian approach, this paper evaluates whether modifications of the QUEST method (particularly Step 2, but also Steps 1 and 3) can lead to greater precision and reduced bias. Four variations of the QUEST method (differing in Step 2) were evaluated by computer simulations. In addition to the standard method of setting the stimulus intensity to the mode of the current p.d.f. of threshold, the alternatives of using the mean and the median were evaluated. In the fourth variation--the Minimum Variance Method--the next stimulus intensity is chosen to minimize the expected variance at the end of the next trial. An exact enumeration technique with up to 20 trials was used for both yes-no and two-alternative forced-choice (2AFC) experiments. In all cases, using the mean (here called ZEST) provided better precision than using the median which in turn was better than using the mode. The Minimum Variance Method provided slightly better precision than ZEST. The usual threshold criterion--based on the "ideal sweat factor"--may not provide optimum precision; efficiency can generally be improved by optimizing the threshold criterion. We therefore recommend either using ZEST with the optimum threshold criterion or the more complex Minimum Variance Method. A distinction is made between "measurement bias", which is derived from the mean of repeated threshold estimates for a single real threshold, and "interpretation bias", which is derived from the mean of real thresholds yielding a single threshold estimate. If their assumptions are correct, the current methods have no interpretation bias, but they do have measurement bias. Interpretation bias caused by errors in the assumptions used by ZEST is evaluated. The precisions and merits of yes-no and 2AFC techniques are compared.(ABSTRACT TRUNCATED AT 400 WORDS)

A new generation of algorithms for computerized threshold perimetry, SITA.

Boel Bengtsson,  Jonny Olsson,  Anders Heijl … (1997)
The purpose of this work was to develop a new family of test algorithms for computerized static threshold perimetry which significantly reduces test time without any reduction of data quality. A comprehensive visual field model constructed from available knowledge of normal and glaucomatous visual fields is continuously updated during testing. The model produces threshold estimates and also estimates of the certainty to which the threshold is known at each point. Testing is interrupted at each test location at predetermined levels of threshold certainty. New time-saving methods are employed for estimation of false answers, and test pacing is optimized. After completion of the test, all threshold estimates are re-computed, taking into account the complete body of patient responses. Computer simulations were used to optimize the different parameters of the new algorithms, to evaluate the relative importance of those parameters, and to evaluate the performance of the algorithm as a whole in comparison with a standard algorithm. Simulated test results obtained with this algorithm were slightly more accurate than those of the Humphrey Full Threshold test algorithm. The number of simulated stimuli presented was reduced by an average of 29% in normal fields and 26% in glaucomatous fields. Actual clinical test time should be further reduced, since the influence of the improved timing algorithm was not included in the simulations. We applied new methods which take available knowledge of visual field physiology and pathophysiology into account, and employ modern computer-intensive mathematical methods for real time estimates of threshold values and threshold error estimates. In this way it was possible to design a family of testing algorithms which significantly reduced perimetric test time without any loss of quality in results.