SCN8A mutation in a child presenting with seizures and developmental delays 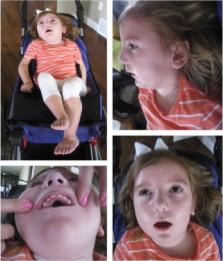 The SCN8A gene encodes the sodium voltage-gated channel alpha subunit 8. Mutations in this gene have been associated with early infantile epileptic encephalopathy type 13. With the use of whole-exome sequencing, a de novo missense mutation in SCN8A was identified in a 4-yr-old female who initially exhibited symptoms of epilepsy at the age of 5 mo that progressed to a severe condition with very little movement, including being unable to sit or walk on her own.

Garth R. Brown,  Vichet Hem,  Kenneth Katz … (2014)
The National Center for Biotechnology Information's (NCBI) Gene database (www.ncbi.nlm.nih.gov/gene) integrates gene-specific information from multiple data sources. NCBI Reference Sequence (RefSeq) genomes for viruses, prokaryotes and eukaryotes are the primary foundation for Gene records in that they form the critical association between sequence and a tracked gene upon which additional functional and descriptive content is anchored. Additional content is integrated based on the genomic location and RefSeq transcript and protein sequence data. The content of a Gene record represents the integration of curation and automated processing from RefSeq, collaborating model organism databases, consortia such as Gene Ontology, and other databases within NCBI. Records in Gene are assigned unique, tracked integers as identifiers. The content (citations, nomenclature, genomic location, gene products and their attributes, phenotypes, sequences, interactions, variation details, maps, expression, homologs, protein domains and external databases) is available via interactive browsing through NCBI's Entrez system, via NCBI's Entrez programming utilities (E-Utilities and Entrez Direct) and for bulk transfer by FTP.

D. Lancet,  J Prilusky,  M Rebhan … (1997)
Modern biology is shifting from the 'one gene one postdoc' approach to genomic analyses that include the simultaneous monitoring of thousands of genes. The importance of efficient access to concise and integrated biomedical information to support data analysis and decision making is therefore increasing rapidly, in both academic and industrial research. However, knowledge discovery in the widely scattered resources relevant for biomedical research is often a cumbersome and non-trivial task, one that requires a significant amount of training and effort. To develop a model for a new type of topic-specific overview resource that provides efficient access to distributed information, we designed a database called 'GeneCards'. It is a freely accessible Web resource that offers one hypertext 'card' for each of the more than 7000 human genes that currently have an approved gene symbol published by the HUGO/GDB nomenclature committee. The presented information aims at giving immediate insight into current knowledge about the respective gene, including a focus on its functions in health and disease. It is compiled by Perl scripts that automatically extract relevant information from several databases, including SWISS-PROT, OMIM, Genatlas and GDB. Analyses of the interactions of users with the Web interface of GeneCards triggered development of easy-to-scan displays optimized for human browsing. Also, we developed algorithms that offer 'ready-to-click' query reformulation support, to facilitate information retrieval and exploration. Many of the long-term users turn to GeneCards to quickly access information about the function of very large sets of genes, for example in the realm of large-scale expression studies using 'DNA chip' technology or two-dimensional protein electrophoresis. Freely available at http://bioinformatics.weizmann.ac.il/cards/ cards@bioinformatics.weizmann.ac.il

This article is distributed under the terms of the Creative Commons Attribution License, which permits unrestricted reuse and redistribution provided that the original author and source are credited.