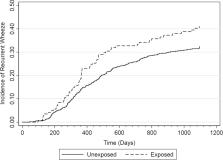 Eva Untersmayr, Otto Scheiner, Franziska Walter … (2005)
Recently, we have demonstrated that anti-ulcer drugs, such as H2-receptor blockers and proton pump inhibitors, promote the development of immediate type food allergy toward digestion-labile proteins in mice. The aim of this study was to examine the allergological relevance of these findings in humans. In an observational cohort study, we screened 152 adult patients from a gastroenterological outpatient clinic with negative case histories for atopy or allergy, who were medicated with H2-receptor blockers or proton pump inhibitors for 3 months. IgE reactivities to food allergens before and after 3 months of anti-acid treatment were compared serologically. Ten percent of the patients showed a boost of preexisting IgE antibodies and 15% de novo IgE formation toward numerous digestion-labile dietary compounds, like milk, potato, celery, carrots, apple, orange, wheat, and rye flour. Thus, the relative risk to develop food-specific IgE after anti-acid therapy was 10.5 (95% confidence interval: 1.44-76.48). The long-term effect was evaluated 5 months after therapy. Food-specific IgE could still be measured in 6% of the patients, as well as significantly elevated serum concentrations of ST2, a Th2-specific marker. An unspecific boost during the pollen season could be excluded, as 50 untreated control patients revealed no changes in their IgE pattern. In line with our previous animal experiments, our data strongly suggest that anti-ulcer treatment primes the development of IgE toward dietary compounds in long-term acid-suppressed patients.

Klaus Bønnelykke, Carole Ober (2016)
Asthma is a heterogeneous clinical syndrome that includes subtypes of disease with different underlying causes and disease mechanisms. Asthma is caused by a complex interaction between genes and environmental exposures; early-life exposures in particular play an important role. Asthma is also heritable, and a number of susceptibility variants have been discovered in genome-wide association studies, although the known risk alleles explain only a small proportion of the heritability. In this review, we present evidence supporting the hypothesis that focusing on more specific asthma phenotypes, such as childhood asthma with severe exacerbations, and on relevant exposures that are involved in gene-environment interactions (GEIs), such as rhinovirus infections, will improve detection of asthma genes and our understanding of the underlying mechanisms. We will discuss the challenges of considering GEIs and the advantages of studying responses to asthma-associated exposures in clinical birth cohorts, as well as in cell models of GEIs, to dissect the context-specific nature of genotypic risks, to prioritize variants in genome-wide association studies, and to identify pathways involved in pathogenesis in subgroups of patients. We propose that such approaches, in spite of their many challenges, present great opportunities for better understanding of asthma pathogenesis and heterogeneity and, ultimately, for improving prevention and treatment of disease.

Carlos Camargo, Jonathan Mansbach, Kohei Hasegawa (2014)
Bronchiolitis is a common early childhood illness and an important cause of morbidity, it is the number one cause of hospitalization among US infants. Bronchiolitis is also an active area of research, and recent studies have advanced our understanding of this illness. Although it has long been the conventional wisdom that the infectious etiology of bronchiolitis does not affect outcomes, a growing number of studies have linked specific pathogens of bronchiolitis (e.g., rhinovirus) to short- and long-term outcomes, such as future risk of developing asthma. The authors review the advent of molecular diagnostic techniques that have demonstrated diverse pathogens in bronchiolitis, and they review recent studies on the complex link between infectious pathogens of bronchiolitis and the development of childhood asthma.