The involvement of regulatory non-coding RNAs in sepsis: a systematic review 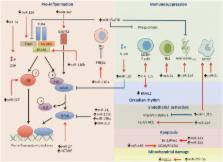 We searched articles indexed in PubMed (MEDLINE), EMBASE and Europe PubMed Central databases using the Medical Subject Heading (MeSH) or Title/Abstract words (“microRNA”, “long non-coding RNA”, “circular RNA”, “sepsis” and/or “septic shock”) from inception to Sep 2016. Studies investigating the role of host-derived microRNA, long non-coding RNA, and circular RNA in the pathogenesis of and as biomarkers or therapeutics in sepsis were included. Data were extracted in terms of the role of non-coding RNAs in pathogenesis, and their applicability for use as biomarkers or therapeutics in sepsis. Two independent researchers assessed the quality of studies using a modified guideline from the Systematic Review Center for Laboratory animal Experimentation (SYRCLE), a tool based on the Cochrane Collaboration Risk of Bias tool.

Observational studies revealed dysregulation of non-coding RNAs in septic patients. Experimental studies confirmed their crosstalk with JNK/NF-κB and other cellular pathways pertinent to innate immunity, mitochondrial function, and apoptosis. Of the included studies, the SYRCLE scores ranged from 3 to 7 (average score of 4.55). This suggests a moderate risk of bias. Of the 10 articles investigating non-coding RNAs as biomarkers, none of them included a validation cohort. Selective reporting of sensitivity, specificity, and receiver operating curve was common.

Although non-coding RNAs appear to be good candidates as biomarkers and therapeutics for sepsis, their differential expression across tissues complicated the process. Further investigation on organ-specific delivery of these regulatory molecules may be useful.

Ariadne Androulidaki,  Dimitrios Iliopoulos,  Alicia Arranz … (2009)
MicroRNAs regulated by lipopolysaccharide (LPS) target genes that contribute to the inflammatory phenotype. Here, we showed that the protein kinase Akt1, which is activated by LPS, positively regulated miRNAs let-7e and miR-181c but negatively regulated miR-155 and miR-125b. In silico analyses and transfection studies revealed that let-7e repressed Toll-like receptor 4 (TLR4), whereas miR-155 repressed SOCS1, two proteins critical for LPS-driven TLR signaling, which regulate endotoxin sensitivity and tolerance. As a result, Akt1(-/-) macrophages exhibited increased responsiveness to LPS in culture and Akt1(-/-) mice did not develop endotoxin tolerance in vivo. Overexpression of let-7e and suppression of miR-155 in Akt1(-/-) macrophages restored sensitivity and tolerance to LPS in culture and in animals. These results indicate that Akt1 regulates the response of macrophages to LPS by controlling miRNA expression.

Xinghui Sun,  Basak Icli,  Akm Wara … (2012)
EC activation and dysfunction have been linked to a variety of vascular inflammatory disease states. The function of microRNAs (miRNAs) in vascular EC activation and inflammation remains poorly understood. Herein, we report that microRNA-181b (miR-181b) serves as a potent regulator of downstream NF-κB signaling in the vascular endothelium by targeting importin-α3, a protein that is required for nuclear translocation of NF-κB. Overexpression of miR-181b inhibited importin-α3 expression and an enriched set of NF-κB-responsive genes such as adhesion molecules VCAM-1 and E-selectin in ECs in vitro and in vivo. In addition, treatment of mice with proinflammatory stimuli reduced miR-181b expression. Rescue of miR-181b levels by systemic administration of miR-181b "mimics" reduced downstream NF-κB signaling and leukocyte influx in the vascular endothelium and decreased lung injury and mortality in endotoxemic mice. In contrast, miR-181b inhibition exacerbated endotoxin-induced NF-κB activity, leukocyte influx, and lung injury. Finally, we observed that critically ill patients with sepsis had reduced levels of miR-181b compared with control intensive care unit (ICU) subjects. Collectively, these findings demonstrate that miR-181b regulates NF-κB-mediated EC activation and vascular inflammation in response to proinflammatory stimuli and that rescue of miR-181b expression could provide a new target for antiinflammatory therapy and critical illness.

Catalin Vasilescu,  Simona Rossi,  Masayoshi Shimizu … (2009)
Background The physiopathology of sepsis continues to be poorly understood, and despite recent advances in its management, sepsis is still a life-threatening condition with a poor outcome. If new diagnostic markers related to sepsis pathogenesis will be identified, new specific therapies might be developed and mortality reduced. Small regulatory non-coding RNAs, microRNAs (miRNAs), were recently linked to various diseases; the aim of our prospective study was to identify miRNAs that can differentiate patients with early-stage sepsis from healthy controls and to determine if miRNA levels correlate with the severity assessed by the Sequential Organ Failure Assessment (SOFA) score. Methodology/Principal Findings By using genome-wide miRNA profiling by microarray in peripheral blood leukocytes, we found that miR-150, miR-182, miR-342-5p, and miR-486 expression profiles differentiated sepsis patients from healthy controls. We also proved by quantitative reverse transcription-polymerase chain reaction that miR-150 levels were significantly reduced in plasma samples of sepsis patients and correlated with the level of disease severity measured by the SOFA score, but were independent of the white blood counts (WBC). We found that plasma levels of tumor necrosis factor alpha, interleukin-10, and interleukin-18, all genes with sequence complementarity to miR-150, were negatively correlated with the plasma levels of this miRNA. Furthermore, we identified that the plasma levels ratio for miR-150/interleukin-18 can be used for assessing the severity of the sepsis. Conclusions/Significance We propose that miR-150 levels in both leukocytes and plasma correlate with the aggressiveness of sepsis and can be used as a marker of early sepsis. Furthermore, we envision miR-150 restoration as a future therapeutic option in sepsis patients.