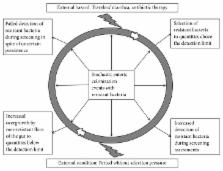 The spread of multidrug-resistant bacteria in resource-poor settings affects the military medical service in case of deployments of soldiers to war and crisis zones. Patients with war injuries are prone to colonization or infection with multidrug-resistant bacteria. Resistant Gram-negative bacteria play a dominant role in military wound infections. Problematic hygiene conditions on deployment facilitate exposition of soldiers with subsequent colonization. Although colonizing strains are frequently cleared from their hosts after returning from deployment, transmission to close contacts of the soldiers in the home country cannot be excluded and therapeutic options are reduced if colonization progresses to invasive infection. Since sophisticated culture-based diagnostic approaches are typically not available in the field setting on deployment, molecular rapid diagnostic test systems are an option for transmission control if the locally prevalent molecular resistance mechanisms are known. Efforts for global resistance surveillance can contribute to better understanding of resistance distribution and spread at deployment sites. This review summarizes experience of the military medical services with multidrug resistance on deployment and with the influx of resistant strains to the home country and discusses potential use of available molecular rapid test systems as an option for the field setting.

Anu Kantele,  Tinja Lääveri,  Sointu Mero … (2015)
Colonized travelers contribute to the pandemic spread of resistant intestinal bacteria. This study is the first to show that antimicrobial use during travel predisposes to colonization by intestinal extended-spectrum beta-lactamase-producing Enterobacteriaceae. Travelers refrain from taking unnecessary antibiotics.

High Rate of Acquisition but Short Duration of Carriage of Multidrug-Resistant Enterobacteriaceae After Travel to the Tropics.

Etienne Ruppé,  Laurence Armand-Lefevre,  Candice Estellat … (2015)
Multidrug-resistant Enterobacteriaceae (MRE) are widespread in the community, especially in tropical regions. Travelers are at risk of acquiring MRE in these regions, but the precise extent of the problem is not known.