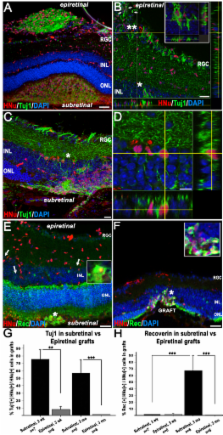 To examine the potential of NIH-maintained human embryonic stem cell (hESC) lines TE03 and UC06 to differentiate into retinal progenitor cells (hESC-RPCs) using the noggin/Dkk-1/IGF-1/FGF9 protocol. An additional goal is to examine the in vivo dynamics of maturation and retinal integration of subretinal and epiretinal (vitreous space) hESC-RPC grafts without immunosuppression.

hESCs were neuralized in vitro with noggin for 2 weeks and expanded to derive neuroepithelial cells (hESC-neural precursors, NPs). Wnt ( Integration 1 and wingless) blocking morphogens Dickkopf-1 (Dkk-1) and Insulin-like growth factor 1 (IGF-1) were used to direct NPs to a rostral neural fate, and fibroblast growth factor 9 (FGF9)/fibroblast growth factor-basic (bFGF) were added to bias the differentiation of developing anterior neuroectoderm cells to neural retina (NR) rather than retinal pigment epithelium (RPE). Cells were dissociated and grafted into the subretinal and epiretinal space of young adult (4–6-week-old) mice (C57BL/6J x129/Sv mixed background). Remaining cells were replated for (i) immunocytochemical analysis and (ii) used for quantitative reverse transcription polymerase chain reaction (qRT–PCR) analysis. Mice were sacrificed 3 weeks or 3 months after grafting, and the grafts were examined by histology and immunohistochemistry for survival of hESC-RPCs, presence of mature neuronal and retinal markers, and the dynamics of in vivo maturation and integration into the host retina.

At the time of grafting, hESC-RPCs exhibited immature neural/neuronal immunophenotypes represented by nestin and neuronal class III β-tubulin, with about half of the cells positive for cell proliferation marker Kiel University -raised antibody number 67 (Ki67), and no recoverin-positive (recoverin [+]) cells. The grafted cells expressed eye field markers paired box 6 ( PAX6), retina and anterior neural fold homeobox ( RAX), sine oculis homeobox homolog 6 ( SIX6), LIM homeobox 2 ( LHX2), early NR markers (Ceh-10 homeodomain containing homolog [ CHX10], achaete-scute complex homolog 1 [ MASH1], mouse atonal homolog 5 [ MATH5], neurogenic differentiation 1 [ NEUROD1]), and some retinal cell fate markers (brain-specific homeobox/POU domain transcription factor 3B [ BRN3B], prospero homeobox 1 [ PROX1], and recoverin). The cells in the subretinal grafts matured to predominantly recoverin [+] phenotype by 3 months and survived in a xenogenic environment without immunosuppression as long as the blood–retinal barrier was not breached by the transplantation procedure. The epiretinal grafts survived but did not express markers of mature retinal cells. Retinal integration into the retinal ganglion cell (RGC) layer and the inner nuclear layer (INL) was efficient from the epiretinal but not subretinal grafts. The subretinal grafts showed limited ability to structurally integrate into the host retina and only in cases when NR was damaged during grafting. Only limited synaptogenesis and no tumorigenicity was observed in grafts.

Our studies show that (i) immunosuppression is not mandatory to xenogenic graft survival in the retina, (ii) the subretinal but not the epiretinal niche can promote maturation of hESC-RPCs to photoreceptors, and (iii) the hESC-RPCs from epiretinal but not subretinal grafts can efficiently integrate into the RGC layer and INL. The latter could be of value for long-lasting neuroprotection of retina in some degenerative conditions and glaucoma. Overall, our results provide new insights into the technical aspects associated with cell-based therapy in the retina.

Yaping Chu,  R. Hauser,  T. Freeman … (2008)
Fourteen years after transplantation into the striatum of an individual with Parkinson's disease, grafted nigral neurons were found to have Lewy body-like inclusions that stained positively for alpha-synuclein and ubiquitin and to have reduced immunostaining for dopamine transporter. These pathological changes suggest that Parkinson's disease is an ongoing process that can affect grafted cells in the striatum in a manner similar to host dopamine neurons in the substantia nigra. These findings have implications for cell-based therapies and for understanding the cause of Parkinson's disease.

R. Kao,  Joseph S. Dillon,  Devore S Culver … (2001)
Transplantation of human embryonic dopamine neurons into the brains of patients with Parkinson's disease has proved beneficial in open clinical trials. However, whether this intervention would be more effective than sham surgery in a controlled trial is not known. We randomly assigned 40 patients who were 34 to 75 years of age and had severe Parkinson's disease (mean duration, 14 years) to receive a transplant of nerve cells or sham surgery; all were to be followed in a double-blind manner for one year. In the transplant recipients, cultured mesencephalic tissue from four embryos was implanted into the putamen bilaterally. In the patients who received sham surgery, holes were drilled in the skull but the dura was not penetrated. The primary outcome was a subjective global rating of the change in the severity of disease, scored on a scale of -3.0 to 3.0 at one year, with negative scores indicating a worsening of symptoms and positive scores an improvement. The mean (+/-SD) scores on the global rating scale for improvement or deterioration at one year were 0.0+/-2.1 in the transplantation group and -0.4+/-1.7 in the sham-surgery group. Among younger patients (60 years old or younger), standardized tests of Parkinson's disease revealed significant improvement in the transplantation group as compared with the sham-surgery group when patients were tested in the morning before receiving medication (P=0.01 for scores on the Unified Parkinson's Disease Rating Scale; P=0.006 for the Schwab and England score). There was no significant improvement in older patients in the transplantation group. Fiber outgrowth from the transplanted neurons was detected in 17 of the 20 patients in the transplantation group, as indicated by an increase in 18F-fluorodopa uptake on positron-emission tomography or postmortem examination. After improvement in the first year, dystonia and dyskinesias recurred in 15 percent of the patients who received transplants, even after reduction or discontinuation of the dose of levodopa. Human embryonic dopamine-neuron transplants survive in patients with severe Parkinson's disease and result in some clinical benefit in younger but not in older patients.