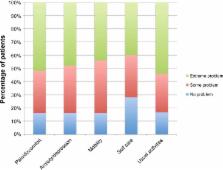 Mixed venous and arterial ulcers account for approximately 15%–30% of all venous leg ulcerations. Several studies have shown that matrix metalloproteinases (MMPs) and neutrophil gelatinase-associated lipocalin (NGAL) play a central role in the pathophysiology of venous and arterial diseases. Some studies have shown the efficacy of glycosaminoglycans, such as sulodexide (SDX), in treating patients with leg ulcers. The aim of this study was to evaluate clinical effects of SDX and its correlation with MMPs and NGAL expression in patients with mixed arterial and venous leg ulcers.

Patients eligible for this study were of both sexes, older than 20 years, and with a clinical and instrumental diagnosis of mixed ulcer.

Fifty-three patients of both sexes were enrolled and divided into two groups by means of randomization tables. Group A (treated group) comprised 18 females and ten males (median age: 68.7 years) treated with standard treatment (compression therapy and surgery) + SDX (600 lipoprotein lipase-releasing units/day intramuscularly) for 15 days followed by SDX 250 lipase-releasing units every 12 hours day orally for 6 months as adjunctive treatment. Group B (control group) comprised 17 females and eight males (median age: 64.2 years) treated with standard treatment only (compression therapy and surgery). The type of surgery was chosen according to anatomical level of vein incompetence: superficial venous open surgery and/or subfascial endoscopic perforating surgery. In all enrolled patients, blood samples were collected in order to evaluate the plasma levels of MMPs and NGAL through enzyme-linked immunosorbent assay. These results were compared to another control group (Group C) of healthy individuals. Moreover, biopsies of ulcers were taken to evaluate the tissue expression of MMPs and NGAL through Western blot analysis. Our results revealed that SDX treatment is able to reduce both plasma levels and tissue expression of MMPs improving the clinical conditions in patients with mixed ulcers.

Inhibition of MMPs could represent a possible therapeutic intervention to limit the progression of leg ulceration. In particular, our findings demonstrate the efficacy of SDX in patients with mixed arterial and venous chronic ulcers of the lower limbs.

Matrix metalloproteinases (MMPs) in health and disease: an overview.

Charles J. Malemud (2005)
Matrix metalloproteinases (MMPs) are members of an enzyme family that require a zinc ion in their active site for catalytic activity. MMPs are critical for maintaining tissue allostasis. MMPs are active at neutral pH and can therefore catalyze the normal turnover of extracellular matrix (ECM) macromolecules such as the interstitial and basement membrane collagens, proteoglycans such as aggrecan, decorin, biglycan, fibromodulin and versican as well as accessory ECM proteins such as fibronectin. Members of the MMP family include the "classical" MMPs, the membrane-bound MMPs (MT-MMPs) the ADAMs (a disintegrin and metalloproteinase; adamlysins) and the ADAMTS (a disintegrin and metalloproteinase with thrombospondin motif). There are more than 20 members in the MMP and ADAMTS family including the collagenases, gelatinases, stromelysins, some elastases and aggrecanases. Adamlysins are membrane-bound MMPs that also degrade aggrecan, but more importantly, one ADAM family member (i.e.ADAM-17) is a tumor necrosis factor-alpha (TNF-alpha)-converting enzyme (TACE) that activates pro-TNF-alpha. Most of the MMPs are synthesized as inactive latent enzymes. Conversion to the active enzyme is generally mediated by activator systems that include plasminogen activator or the pro-hormone convertase, furin. MMP activity is regulated by a group of endogenous proteins, called, tissue inhibitor of metalloproteinases (TIMPs) that bind to active and alternative sites of the activated MMP. Significant advances have occurred in the understanding of the regulation of MMPs, ADAMs and ADAMTSs gene expression. In addition, development of MMP inhibitors to study MMP structure/function relationships spawned many studies to determine the effectiveness of MMP inhibitors in regulating abnormal connective tissue turnover. In addition, development of MMP null mice carrying specific MMP deletions has provided an opportunity to explore the role of MMPs in normal development as well as in such diverse conditions and diseases as skeletal dysplasias, coronary artery and heart disease, arthritis, cancer, and brain disorders.

Marko Obradovic,  Arun Lal,  Hiltrud Liedgens (2013)
Background Assessments of health-related quality of life and particularly utility values are important components of health economic analyses. Several instruments have been developed to measure utilities. However no consensus has emerged regarding the most appropriate instrument within a therapeutic area such as chronic pain. The study compared two instruments – EQ-5D and SF-6D – for their performance and validity in patients with chronic pain. Methods Pooled data from three randomised, controlled clinical trials with two active treatment groups were used. The included patients suffered from osteoarthritis knee pain or low back pain. Differences between the utility measures were compared in terms of mean values at baseline and endpoint, Bland–Altman analysis, correlation between the dimensions, construct validity, and responsiveness. Results The analysis included 1977 patients, most with severe pain on the Numeric Rating Scale. The EQ-5D showed a greater mean change from baseline to endpoint compared with the SF-6D (0.43 to 0.58 versus 0.59 to 0.64). Bland–Altman analysis suggested the difference between two measures depended on the health status of a patient. Spearmans rank correlation showed moderate correlation between EQ-5D and SF-6D dimensions. Construct validity showed both instruments could differentiate between patient subgroups with different severities of adverse events and analgesic efficacies but larger differences were detected with the EQ-5D. Similarly, when anchoring the measures to a disease-specific questionnaire – Western Ontario and McMaster Universities Osteoarthritis Index (WOMAC) – both questionnaires could differentiate between WOMAC severity levels but the EQ-5D showed greater differences. Responsiveness was also higher with the EQ-5D and for the subgroups in which improvements in health status were expected or when WOMAC severity level was reduced the improvements with EQ-5D were higher than with SF-6D. Conclusions This analysis showed that the mean EQ-5D scores were lower than mean SF-6D scores in patients with chronic pain. EQ-5D seemed to have higher construct validity and responsiveness in these patients.

Analysis of the acute and chronic wound environments: the role of proteases and their inhibitors.